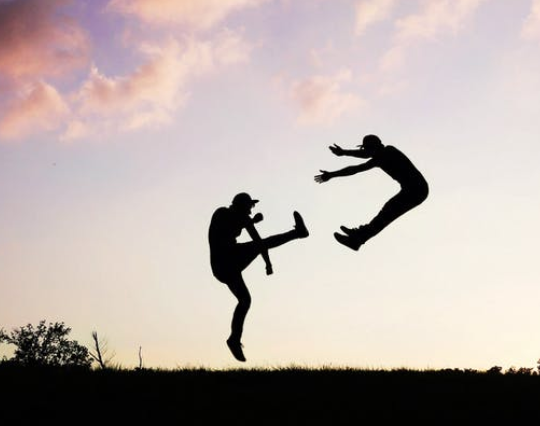 Eric is a believer from south Louisiana and has volunteered for BTJ in China. He and his wife moved to China several years ago to serve BTJ missionaries who wanted to learn English. His friends describe him as quiet, humble and dedicated to fulfilling the will of God in his life. He is not the loud, boisterous, online presence most people think of when they see political figures banned on Twitter – not even close. “The funny thing is, I didn’t really use Twitter that much,” he said in a BTJ podcast today.

You can listen to the live podcast with Eric by clicking here.

It appears that Twitter did not remove Eric because of the Tweets he posted, but because of the Tweets he ‘liked’ and interacted with. This is a new enforcement that Twitter is now using. Eric ‘liked’, shared, and commented on content that Twitter did not like Eric interacting with. According to Twitter, Eric violated the regulations that have to do with “platform manipulation and spam.” (For the record, Eric never stalked, harassed, or sent unwanted bulk messages to users, as would be defined as “spam”).

That is when things got really creepy. In a threatening manner, Twitter wrote, “Note, that if you attempt to evade a permanent suspension by creating new accounts, we will suspend your new accounts.” (Add in maniacal background music here). 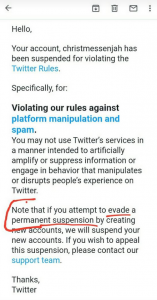 Yes Eric, if you create any new accounts under a different name, Twitter will hunt you down, arrest your family members, find your secret new accounts and suspend those new accounts – so don’t even think about it!

Eric did not violate Twitter rules. He did not abuse or spam anyone on the platform. Eric was guilty of viewing, liking, and sharing ideas that have been prohibited by the overlords. His Twitter handle name @Christmessenjah was most likely enough to tell the technocracy that he was ‘one of those’ Christians.

Twitter’s actions are a further reminder that Christians are not welcome to share their ideas on their platform. For Back to Jerusalem, it is a sober reality that we desperately need people like Eric to continue working on DingDash to make it a better alternative to tyrannical social media platforms.