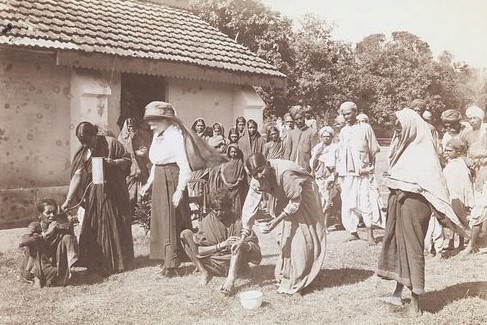 If you visit the city of Canterbury in England, you will find some interesting remnants of an ancient healthcare system. There is a herb garden, which was used in medieval times by the monks of the nearby monastery. They would use their knowledge of herbal remedies to help relieve the suffering of the sick, long before the development of modern science. Often, those sick would stay in the hospitals run by the monasteries, of which there were hundreds in medieval England. For the poor especially, the monks and nuns often were the only hope of dignified care.

Christians have a long track record of caring for the sick. During epidemics in the ancient Roman empire, Christians would nurse the sick even though it meant many caught the disease themselves and died. And they would care for both fellow Christians and non-believers, which earned Christians a lot of goodwill and caused the church to grow.

In the days of Luther, the plague hit Wittenberg. Luther stayed and urged other Christians in a position of responsibility to do likewise. Although he believed strongly in preventing infection where possible and taking every pre-caution, he felt Christian doctors and ministers should not leave the sick behind to save their own skin. Fast forward, and we see the modern mission movement, which brought not only hope for the soul, but healing for the body, building hospitals in the remotest locations.

Back to Jerusalem stands firmly in this tradition. One example is a clinic we have in China, serving migrant workers who do not have access to healthcare in the Chinese health system. We supported the main physician through medical school and he is now heading up a staff of dedicated Christians, providing healthcare to those who can’t afford it.

Christian ethics strongly support caring for the sick. Our Lord spent a large part of his ministry healing the sick. Self-sacrificial love is at the heart of the gospel. And Matthew 25 shows that in the final judgement, those who will enter the kingdom will be those who, among other things, looked after the sick. No wonder health care has always been a part of Christian witness.

In modern times, healthcare has been largely commercialized. In many countries, there is great health care available, if only you have the money. But commercial interests and healthcare do not go well together. Whereas caring for the sick is at the heart of Christian ethics, exploiting the sick is often an inevitable outcome when this ethic is lacking. During this current pandemic, we have seen plenty of cases of the latter.

In Myanmar for example, the military junta diverted scarce medical resources, like oxygen, to the army, leaving the citizens, which largely oppose the junta, to die in the streets. In this way the regime used the pandemic to oppress the people further.

Earlier we wrote about medical corruption in Iran, where medicine and equipment get diverted from the state system to the black market, lining the pockets of criminals and corrupt officials and leaving thousands without the means to access care.

Other examples are criminal organisations that have used the sudden surge in demand to sell fake medicine and tests, promote unproven or dangerous treatments, or substandard PPE, all to make a quick buck out of the suffering of people. Sometimes fake cures have even been sold in the name of God by men claiming to be his servants.

Plenty of people have given all their money to try to get care for themselves or their loved ones. This is not new. Even in the Bible we find an example of a woman who had spent all she had on doctors which didn’t even manage to help her. Until she met Jesus.

Whereas exploitation of the sick is the way of the world, care for the sick is a calling of the church. Choosing to take upon ourselves inconvenience, costs and risks for the sake of patients who cannot repay us, has through the ages been the strongest testimony we could give of the love of Christ. In a time of pandemic this has become relevant once again. There are good examples of this. Like Christians in the US who sent medical equipment to people in Myanmar and Korean Christians who sent millions of pieces of PPE to countries in need.

May we as the Christians of this generation, like the saints before us, be known for selflessly caring for the sick, both near and far, so that God’s kingdom may be visible among us.