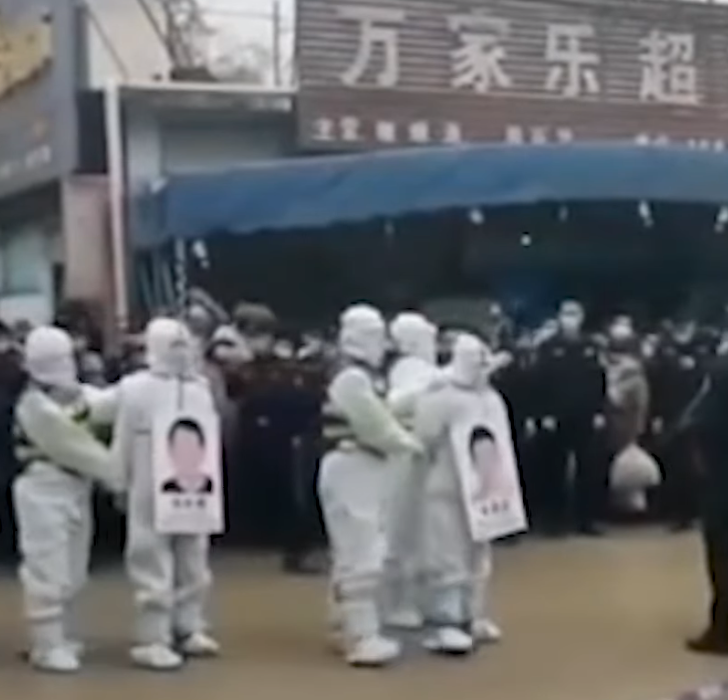 Armed police in hazmat suits harkened back to the days of the Cultural Revolution, when they paraded alleged Covid-19 violators through the streets of Southern China, wearing large signs with their pictures and names around their necks.

Four suspected Covid-19 rule violators were paraded through the streets on Tuesday in front of large crowds in Guangxi’s city of Jingxi. The authorities did not seem to care that the crowds gathered to witness the Covid-19 violators were not socially distanced and perhaps created more of a Covid-19 hazard than the infractions the violators were being accused of.

The event was posted on social media outlets.

Public shaming is a disciplinary action that China has used for decades against Christians. In his book I STAND WITH CHRIST, Pastor Zhang Rongliang recalls his grandfather being marched through the streets for being a Christian:

“Not long after giving me his Bible, Grandfather Sun was publicly humiliated and tortured, receiving a martyr’s crown in the end. He was brought out by local officials and forced to walk down our hometown street with a board hanging around his neck on which was written in huge letters, “Follower of Jesus.” Oh, what a glorious thing to be called! He was marked as an anti-revolutionary and humiliated by the Communist Party.

As a young man, I watched this happen; how painful it was for me to see him marched through the streets while being taunted and abused by vicious townspeople.

Grandfather Sun was forced to wear a tall hat, made out of newspaper, that resembled a Western dunce cap. He looked like a helpless lamb among wolves, but unlike the sheep that I cared for, he couldn’t look to me for protection. My helplessness in the situation brought me great sorrow.”

China banned such public shaming of criminal suspects in 2010 after decades of campaigning by human rights activists, but the practice has been brought back as a tool to use against Covid-19 violators.