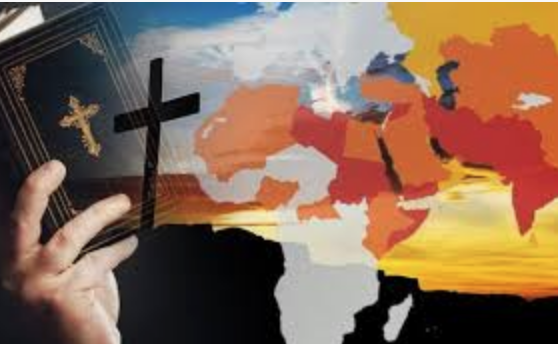 You might not know it by watching the news, but Christians are ‘by far the most persecuted’ religious group in the world today concluded a recent report on the subject.

Christians are being driven out of the Middle East in a modern-day exodus that means the religion could be wiped out in parts ‘where its roots go back furthest’, the study commissioned by the Foreign Office in the UK found.

‘Shocking’ evidence has been found that concludes that the persecution against Christians is worse today than ever before in the history of the church. 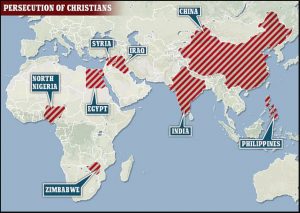 Foreign Secretary of the UK Jeremy Hunt has blamed ‘political correctness’ for a failure to confront the oppression of Christians, which he called the ‘forgotten persecution’.

First, Christians in the west (that have the resources to do something), are not aware of the persecution or what they can do about it.

Secondly, Christians are worried that they may be labeled as Islamaphobic, bigoted, homophobic, or – as Mr. Hunt pointed out – ‘colonialist’ if they speak out agains the persecution.

The study found Christians are ‘harassed’ in more countries than any other religious group, and especially in predominantly Muslim countries in the Middle East and North Africa. His report found 245 million Christians now suffer ‘high levels of persecution’ in 50 countries. That is an increase of 30 million Christians from the year before.

In particular, they have been attacked by extremist groups in Syria, Iraq, Egypt, north-eastern Nigeria and the Philippines, as well as in India and China.

Speaking in the Ethiopian capital Addis Ababa during his five-day tour of Africa, Mr Hunt – who is a committed Christian – said, “I think we’ve all been asleep on the watch when it comes to the persecution of Christians.” He continued on, “I think we have shied away from talking about Christian persecution because we are a Christian country and we have a colonial past…I think it is partly because of political correctness we have avoided confronting this issue. I think there is a misplaced worry that it is colonialist to talk about a religion that was associated with colonial powers.”

Dr Mounstephen, who prepared the report surprisingly added, “Through my previous experience… I was aware of the terrible reality of persecution. But to be honest in preparing this report, I’ve been truly shocked by the severity, scale and scope of the problem.”

BTJ has been working in some of the most persecuted nations on earth and experiences first hand the persecution that is talked about in the report.

If you would like to support the persecuted church you can join the BTJ prayer group or learn more about being a GateKeeper by clicking here: