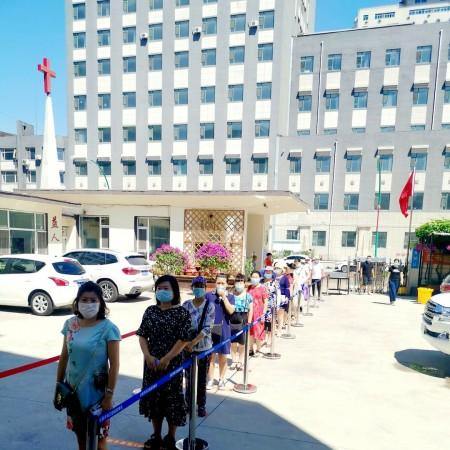 In the early morning hours in the Northeastern Chinese province of Jilin, Chinese Christians lined up outside of their church waiting to get in. Senior Pastor Yan Peng had to open the doors and let people in at 6AM because the line outside was getting so long.

The coronavirus measures were in full force, but that did not stop congregants from hugging and shaking hands. They were simply too excited to contain themselves. “We are finally at the church after 204 days and nights of waiting!” Pastor Peng said.

Some of the church members were silently sobbing as they entered the church. It had been far too long. Pastor Peng’s church has seen many churches around China shut down and closed in the recent uptick of persecution against Christians. They feel fortunate to still be one of the official churches in China that are allowed to continue meeting.

Jilin Province has a very large ethnic Korean minority. Many of them are closely connected with the early Christian revivals of Jonathon Goforth, where tens of thousands were completely transformed. The Northeastern area of China is where North Korea’s leader, Kim Jong Un’s great-great grandfather was once an underground house church pastor.

Pastor Peng delivered a message titled, “Look at that Glorious Country” based on Psalms 133, a Psalm sung by the Israelites during their pilgrimage as they were marching back to Jerusalem. The idea of Back to Jerusalem is never too far from the hearts of the Chinese.

Pastor Peng read Psalms 133:1 – “How good and pleasant it is when God’s people live together in unity!”