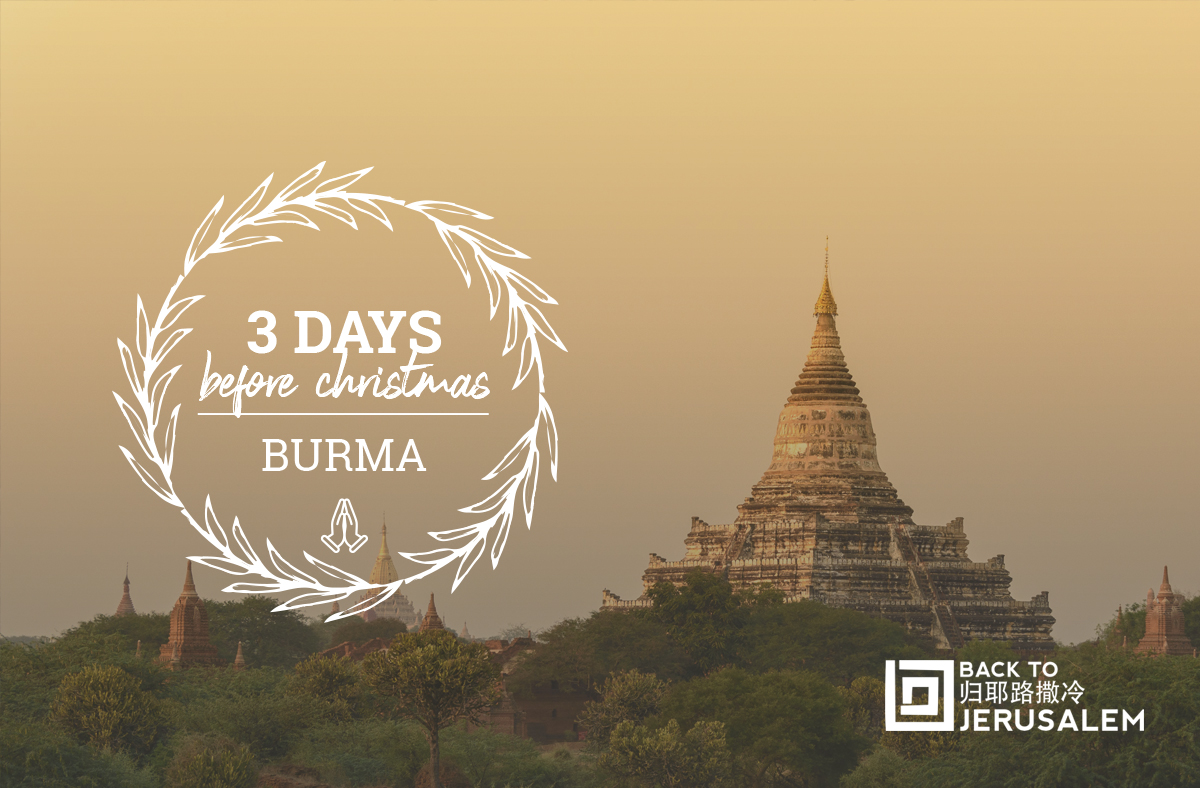 ON THE TENTH DAY OF CHRISTMAS my Savior gave to me, a praying heart for the people of Burma.

Many people refer to Burma by the name “Myanmar”: the name the military rulers gave to it after they forcefully took over the nation. Many of the names of Burma’s cities were also changed. For instance, the capital city of Rangoon was changed to Yangon as a sign that the nation was firmly in the control of new military leaders.

The Chinese house church calls it “mian dian” (缅甸), which roughly translates to “distant field” and it really does feel like a distant field – a distant mission field.

Christianity has not been in Burma for long, but the pain and suffering of Christians has been endured since the beginning. Most of the persecution comes from pressure exerted by Buddhist leaders. Radical Buddhist leaders believe that a person must be a Buddhist in order to truly be a Burmese national. On this one point, both the army and the Buddhists agree; Christians are not truly Burmese and are therefore treated like enemies of the state.

This “Buddhist only” policy has made life almost impossible to live for many Christians in Burma. Christians are forced off of their land, not allowed to have government jobs and in some cases, they are kept from using community water sources. Because of the rampant persecution against them, many are forced to form an underground house church network – something the Chinese church is very familiar with.

In the northern part of Burma are the states of Kachin, Karen, and Northern Shan. These regions constantly see military strikes, gruesome murders of church members and mass genocide. Things have gotten so bad that, in 2008, even Hollywood released a movie which highlighted the plight of these Christians in a film called RAMBO.

Violence against Christians in this region has increased since 2018, prompting thousands of refugees to flee the area. More than 100,000 Christians have been forced to flee their homes and are living in camps where they are denied access to food, healthcare, and clean water because they are not Buddhists.

In March 2019, Human Rights Watch published an extremely disturbing report about Christian girls and women who are sold as sex slaves in China called “Give us a baby and we will let you go.” Young Christian adolescent girls in Burma live in constant fear of becoming a sex slave where they are sold from man to man to be used, abused, and raped over and over, year after year, with no way to escape.

Today, we pray for those Christian girls and their families. We pray for the Christian villages that are forced underground by Buddhists who want to kill them. We lift up the Christian families who are not able to openly worship Jesus this Christmas. During this Christmas season, our deepest prayer is that the blood of Jesus will flow over the entire nation of Burma and bring peace and salvation.

“God would justify the Gentiles by faith, and announced the gospel in advance to Abraham: “All nations will be blessed through you.” So those who rely on faith are blessed along with Abraham, the man of faith.” Galatians 3:8b-9

Listen to the audio podcast for Day 10