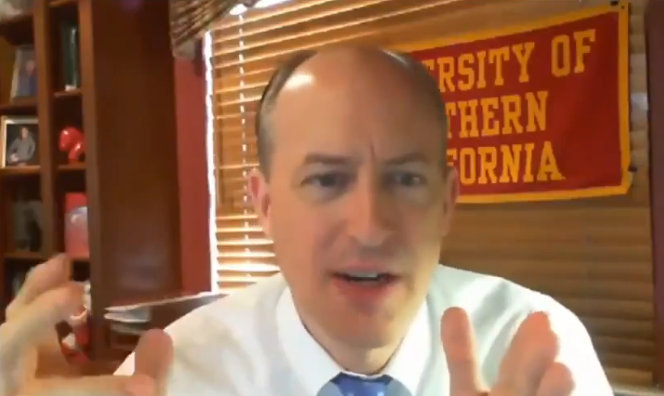 An award-winning communications professor and linguist has been placed on leave after students claimed he harmed their mental health for teaching the most common expression in the Chinese language, that sounds similar to a racial slur.

Professor Greg Patton was teaching an online class to his students at the University of Southern California and discussing how different cultures use filler words. In English it can be “uhh,” in California it can be “like,” in Dutch it’s “ehm,” etc. The professor teaches the Chinese word ‘nege’ ( 那个). This is one of the most frequently used expressions in the Chinese language – one of the oldest languages in the world – and simply means ‘that.’ It is often repeated nege….,nege…..( 那个…, 那个…).

I cannot believe this is real, but it is.

This USC Professor is on leave after students were offended that a Chinese word he used during a lecture on foreign languages sounded like an english racial slur.

Watch the video for yourself: pic.twitter.com/HkFPMEP5I2

When the students heard this word, they felt that it sounded very much like the n*** word – a derogatory phrase used for blacks in America. The students immediately wrote a letter to the dean: “There are over 10,000 characters in the Chinese written language and to use this phrase….is hurtful and unacceptable to our USC Marshall community.”

The students went on to say that their mental health had been wounded. “To expect that we will sit through two more weeks of this class, knowing that the professor lacks the tact, racial awareness and empathy to lead and teach an audience as diverse as ours is unacceptable.”

The teacher was placed on leave and essentially fired from teaching the remainder of that class, eventually being replaced with another professor.

The professor responded with a letter that said, “I have strived to best prepare students with global, real-world and applied examples and illustrations to make the class content come alive and bring diverse voices, situations and experiences into the classroom.”

It is not yet certain whether the students plan to write a letter to China and ask them to change their language.