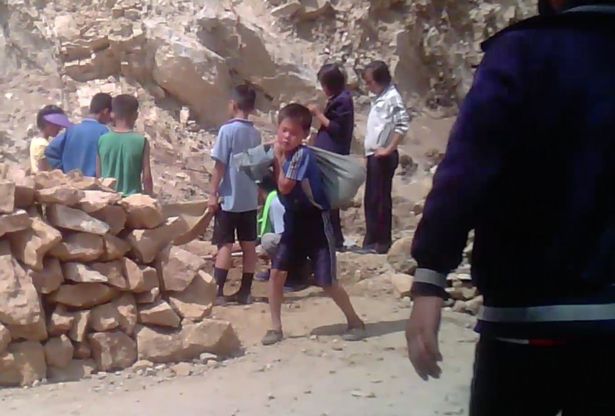 While it is easy to dismiss oral reports of human rights abuses, video footage is much harder to deny or forget. Brave unnamed sources in North Korea have filmed North Korean children doing hard physical labor on railroad construction. The Daily Mirror, a British newspaper, obtained the footage and published it on-line. To demand of the general population to be involved in some form of physical labor is not unheard of in communist countries. Communal efforts to gather in the harvest or work on other large projects can be a positive way to draw people together and involve them in the food supply and improvement of their country. However, North Korea is notorious in how much it demands of its people when it comes to communal efforts, especially in the run up to big events. For example, college students have been known to be pulled out of classes for weeks to renovate buildings, even in the capital Pyongyang.
In this light, the footage of elementary age children building a railroad may seem not that unusual. It could even be presented as a good way to give children some real world experience and doing ‘teambuilding’. However, there are a few things that make the video quite shocking. First, there is the age of the children. Some seem as young as five, although it is hard to tell as children in North Korea often suffer from stunted growth. Children of that age could maybe help with chores, but should not be involved in serious labor.
Secondly, there is the severity of the work. Children are seen chipping rocks off a mountain, howling heavy bags of rocks to a railroad, where other children have to hammer them into smaller pieces. The work is heavy, children could easily be injured, and carrying such heavy loads can damage their backs. There is no protective clothing, such as gloves. The children work in their school uniforms. And there is no protection from the bright sunlight.
Thirdly, it is reported that children have to do this work for up to ten hours a day, which again is something even a strong adult would struggle with. Lastly, it is reported that children are regularly taken out of school for long periods to do labor. Some are reported not have been to school in a year. That makes it much more like slave labor than like a special project, work experience or team building. What is unfair is that children of the richer elites do not have to do such heavy work, only children of the lower class.
As footage like this emerges, we can pray it will encourage world leaders to continue to put pressure on North Korea to improve their human rights record. It is not only about the external danger of nukes but about the millions suffering every day under the cruel system.