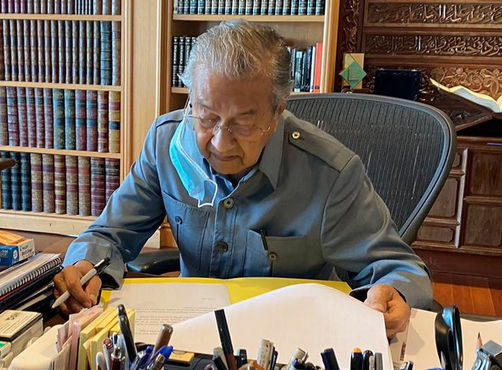 Mahathir Mohamad, Malaysia’s two-time former Prime Minister, publicly announced on Twitter that Muslims have the right to “kill millions of French people for the massacres of the past.” His comment came only hours after a Muslim refugee hacked three Christians to death inside a church in Nice, France.

The former Malaysian Prime Minister was responding to the news from France, after a 21 year-old Tunisian immigrant walked into a church in Nice carrying a Koran and a knife and began killing Christians in the name of Allah.

The man has been identified as Brahim Aouissaoui from Tunisia. According to reports, he arrived in Italy last month on an illegal boat from Africa with other refugees seeking asylum. He was given support and aid by the Italian Red Cross: a traditional Christian organization that assists refugees in need. Italy denied him asylum, but for some reason, he had been released earlier this month and allowed to travel to Paris and on to Nice.

Brahim is thought to be upset about cartoon caricatures of Muhammad that have not been banned. In his home country of Tunisia, as well as many other Muslim countries around the world, Brahim’s actions would be justified by the teachings of the Koran.

The attack in the wealthy city of Nice is the third, in less than two months, that French authorities have attributed to Muslim extremists.

In western media, Brahim has been labeled an extremist who does not fully represent Muslims around the world. What is shocking about the Tweet of the former Malaysian Prime Minister is that Malaysia is often paraded on the world stage as a more moderate, progressive, Muslim country.

The Prime Minister took to Twitter to argue that his words were being taken out of context, but made little effort to change when he wrote, “Irrespective of the religion professed, angry people kill. The French in the course of their history has killed millions of people. Many were Muslims,” the Prime Minister wrote, in an attempt to make a moral equivalency.

He continued, “Since you have blamed all Muslims and the Muslims’ religion for what was done by one angry person, the Muslims have a right to punish the French.”

BTJ missionaries from China understand this rhetoric coming from the former PM. Many of them are currently working in Muslim nations that find any expression of religion, aside from Islam, offensive. Punishment for saying offensive things about Muhammad or for drawing a depiction of him can easily lead to incarceration, beatings, public floggings, or even execution.

Muslim nations do not have freedom of religion.

The former Prime Minister writes that the west has a loose moral code, “but the West should not try to forcibly impose this on others. To do so is to deprive the freedom of these people.”

It is interesting that former Prime Minister aggressively campaigns for Islamic law in France to be respected, but in his own nation no such respect is extended to other religious minorities. All Malays are born Muslim by law – Christian parents have no choice. Christians must hide when they eat during Ramadan and have their ID ready to show police if they violate it. It is illegal for Christians to share their faith with Muslims even if a Muslim asks. Christian Bibles are restricted in their language. In 2004, tickets for Mel Gibson’s mainstream movie “The Passion of the Christ,” was illegal for Malays to watch.