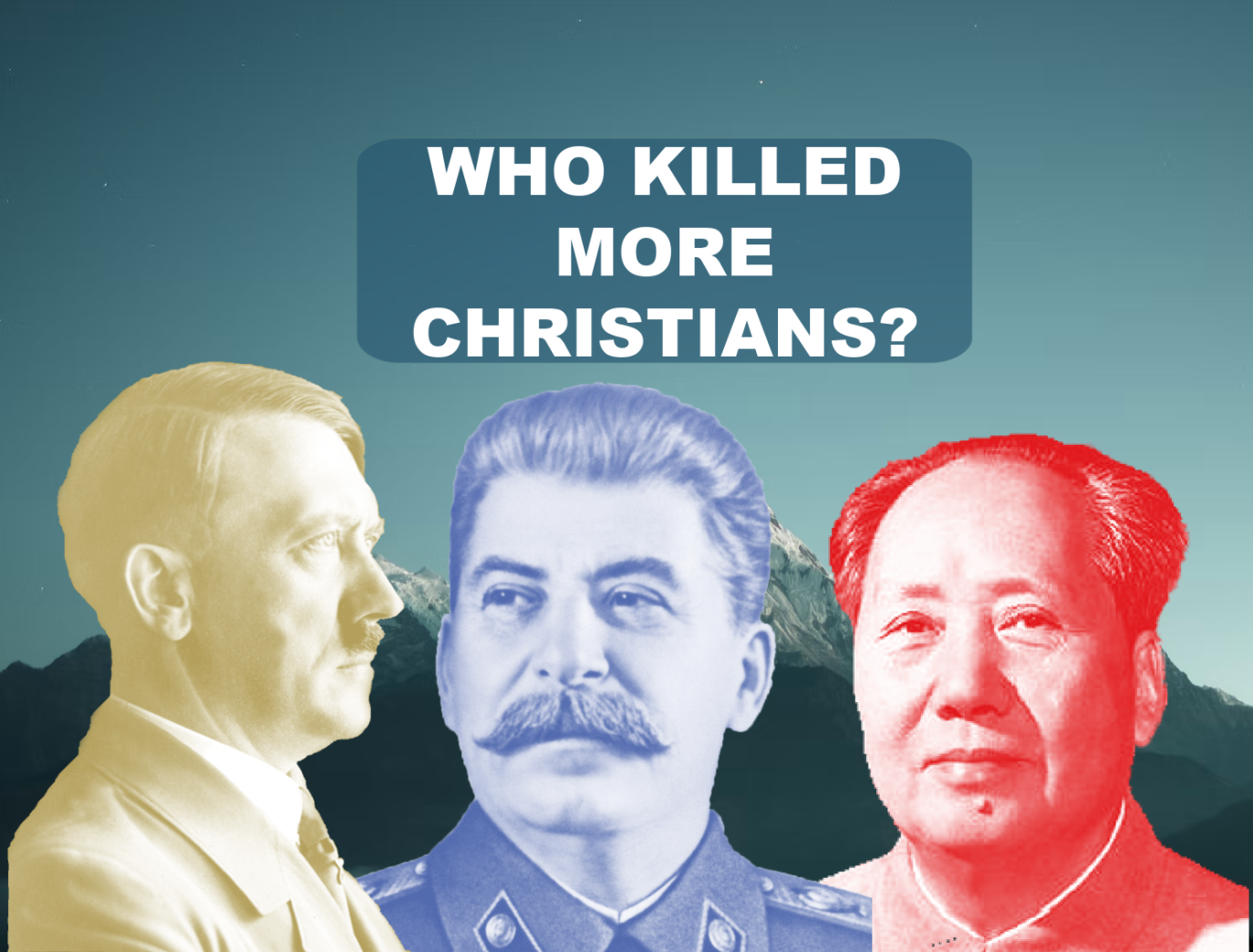 Which tyrannical dictator killed the most Christians in the history of the world? Well, that is not such a straight forward question, since most Christians go underground during times of extreme persecution and their religion is not always known when they are killed. However, the question can be kind of answered by first looking at those who killed the most people using religion as one of their main criteria.

So, which dictator killed the most people?

Ask most people on the street which dictator killed the most people and the immediate knee-jerk reaction would be “Hitler.” Hitler was an evil person and his name will forever ring notoriously throughout history for the atrocious things that he did. He is known for killing six million Jews and five million people from other religions and ethnicities. Of those eleven million people that Hitler killed, it is not known how many were Christians. Though Hitler was a mass murderer and the architect of the Holocaust, at eleven million people, he did not slaughter the most people in history.

Joseph Stalin takes the mantle from Hitler to have killed even more. After taking power in Russia in the 1920s and forcing the nation to accept government sanctioned atheism through Communism, Stalin killed at least 9 million people through mass murder, forced labor, and famine. Though that number seems less than Hitler’s 11 million, Stalin was just getting warmed up. Stalin did not die until 1953. After Hitler’s death, Stalin continued to send people away to die in gulags, many of them for being Christians. The true number of those who were eventually killed is somewhere closer to 60 million, according to some experts. It is not known how many Christians were among those 60 million, but hundreds of thousands of Christians were sentenced to die for their faith in re-education camps, so it can be assumed to be a high number just by looking at percentages.

Hitler and Stalin however, both pale in comparison to one person who is in fact the largest mass murderer in the history of man. Not only did he slaughter people by the millions, but he targeted Christians specifically for a period of three decades and the government that he left behind still targets Christians today.

From the moment that Mao took power in China in 1949, his killing spree started. At first, it was the nationalists and anyone who was considered to be an anti-revolutionary. From 1958 to 1962, his Great Leap Forward policy led to the deaths of up to 45 million people – easily making it the biggest episode of mass murder ever recorded over a period of only four years!

Unfortunately, Mao didn’t stop there. He lived the rest of his life sending out agents to hunt down Christians, torturing them, and having them die excruciating deaths.

Pastor Zhang Rongliang, one of the most well known underground house church pastors in China remembers those days vividly, as he watched his grandfather marched through the streets for being a Christian:

As a young man, I watched this happen; how painful it was for me to see him marched through the streets while being taunted and abused by vicious townspeople.

Grandfather Sun was forced to wear a tall hat, made out of newspaper, that resembled a Western dunce cap. He looked like a helpless lamb among wolves, but unlike the sheep that I cared for, he couldn’t look to me for protection. My helplessness in the situation brought me great sorrow.

Before he died, Grandfather Sun looked at me and said, “My boy, I believe the Lord will greatly use you for His purpose. I am going home now. Remember this with all your might: Continue to preach the good news of Jesus Christ, whether the time is right or not.” (See 2 Timothy 4:2.) Those words stay with me even now. They linger in my memory and have been stamped on my mind as the true mark of sacrifice: “…whether the time is right or not.”

1967 marked the second year of the Revolution. Christians were scattered everywhere as the persecution increased. We were all in full retreat. All church doors had been shut, and no one was holding open meetings or Bible studies. We were on the doorstep of the darkest years in our history.”

Pastor Zhang shares the details of this story in his book I STAND WITH CHRIST.

It is estimated that Mao eventually killed as many as 80 million people. To put that into perspective, Mao killed more people than the entire population of Holland, Sweden, Denmark, Belgium, Noway, Finland, Switzerland, Austria, Estonia, and Iceland – put together!

Mao was easily the largest mass murderer in the history of man, but did he kill the most Christians? It is easy to assume that the number of Christians in China was lower than in Germany or Russia during the days of Hitler and Stalin, but it could be argued that China might have been the most methodical in searching out believers, torturing them, and letting them die in labor camps.

One thing is clear however, and that is Mao’s rabid focus on killing Christians somehow led to the largest Christian revival the world has ever seen. Mao’s desire to eradicate Christianity from Chinese history was a colossal failure. The opposite happened. Mao’s anti-Christian rampage led to more Christian growth than ever thought possible. Mao did in a few years what a million missionaries could not have done in a hundred years. He created a Christian army in China that is currently larger than the entire Communist Party. We write about the details of this Christian Army in our book CHINA AND END TIME PROPHECY.

Mao tried to beat Jesus out of China, but it didn’t work. Today, Mao Zedong’s body lies in a tomb in Tian’anmen Square and yet, there is a cross in the homes of tens of millions of Chinese symbolizing that Jesus is alive in China and Mao Zedong is dead.