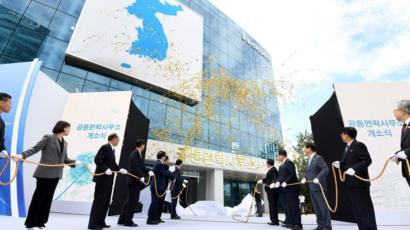 North Korea blew up a highly symbolic liaison office today in the border city of Kaesong. It comes days after they cut the diplomatic communication lines with South Korea. What is going on?

It is not easy to grab the spotlight, when there is so much going on in the world. The United States are consumed with domestic issues, an ongoing pandemic, demonstrations against racism and an upcoming election. Nobody seems even remotely concerned about restarting negotiations with North Korea.

But North Korea is in trouble. Today there was a concerning report in Daily NK that ordinary people in Pyongyang have not had their rations for three months, which is unprecedented. Their final rations received in March were only partial and made up of corn, not rice. A growing number of families have to get by on one meal a day, or even one every two days. Only military and party officials still receive limited rations.

Why is this important? Pyongyang is the pride of the nation. It is a privilege to be allowed to live there. It is home to the nation’s elite. Shortages of anything are usually first felt in rural areas, and the best is kept for the elite on whose loyalty the regime depends.

If those in Pyongyang do not get rations, it means that down the food chain, there are more serious issues. This was confirmed by a recent report from our people on the ground. They let us know that food was becoming scarce. Now spring is usually the hardest time of the year, when previous year’s harvest runs out and the new harvest is not yet ready. But the continued sanctions, the corona virus shut down and the subsequent collapse of Chinese tourism has made this situation worse than previous years.

North Korea desperately needs relief from sanctions to be able to feed their people. But they will not ask nicely. Their long-standing strategy has been provocation. In that way they force South Korea and especially the United States to take notice and try to grow their leverage in negotiations.

Cutting communications and blowing up offices, is their way of saying they need help, and soon. Of course, they do not admit that. It is interesting to notice that the reason the regime has given for their provocations was the anti-regime leaflets that human rights groups in South Korea sent over the border carried by balloons. It could be no more than an excuse, after all, this sending of leaflets has been going on for years. But it is possible that things are getting dire to a degree that these leaflets are beginning to form a serious threat to the regime.

Either way, if these actions by North Korea are indeed an attempt to get the world’s attention, we can expect provocations will continue until parties are back at the table. It is doubtful that North Korea can afford to wait until the pandemic has died down and US presidential elections are done.