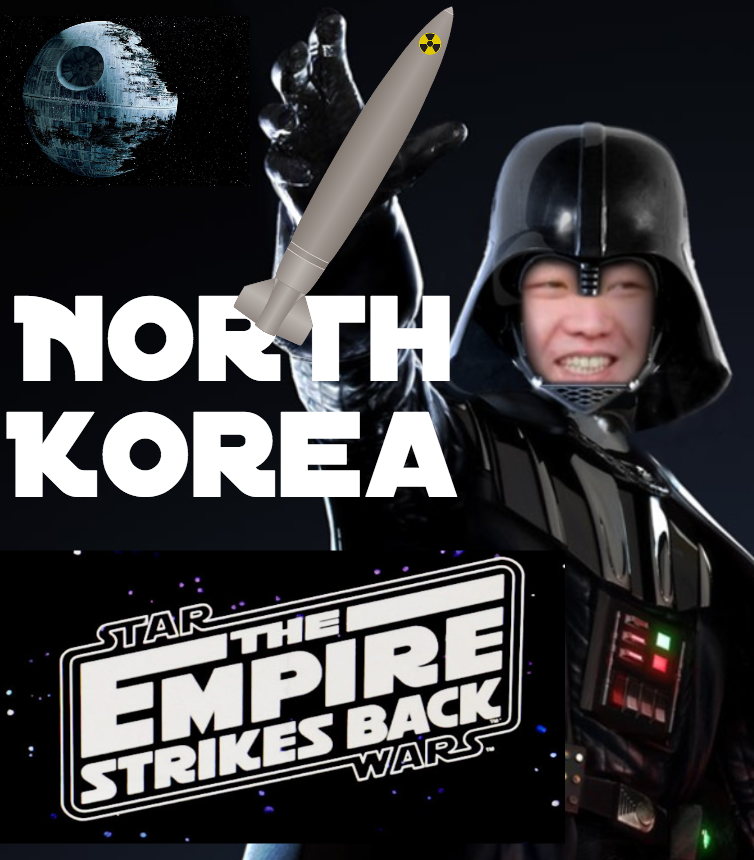 He and his family’s supreme mismanagement of the nation’s resources have led to the death of millions of people already. The Kim family regime would have long ago collapsed under the weight of their own incompetency if it were not for one thing – FEAR.

FEAR is the only power that Kim Jong Un has.

His leaders FEAR death, torture, and the annihilation of their own families if they cross him or make him unhappy.

His people FEAR starvation and torture in gulags if they are caught trying to escape from his control.

South Korea and Japan FEAR that Kim Jong Un will launch an attack at any time on their most populated cities to extract a death toll the world has never seen.

The world FEARs that he will use nuclear weapons on a crazed whim without reason or warning.

Kim Jong Un’s only chance to maintain power is to use the power of the Dark Side – FEAR. To better understand the mind and strategy of North Korea’s leader, it is not entirely unrealistic to compare him to the infamous Star Wars character, Darth Vader. Kim Jong Un, like his father, is an American movie buff. Even though normal North Korean citizens would not be allowed to watch the movie, there is no doubt Kim Jong Un has watched the Star Wars movies many times in his very own plush theater.

Darth Vader did not lead armies by using hope and vision. He threatened his allies and smashed his enemies with FEAR. He indulged the desire to burn with anger and hate. He took pleasure in turning his own people against one another. Potentially killing millions of innocent people did not matter in the least if the action resulted in more power.

Darth Vader’s evil Empire had the prison of Dathomir, as well as secret black site gulag known as the Crypt on the outer reaches of the Anoat System where the fate of the prisoners stood as an example for others to FEAR.  Likewise, North Korea has 14 gulags where Christians are enslaved, tortured, and killed to instill never ending fear in the rest of the population.

Almost every week for the last several months, Kim Jon Un has been ordering the launch of missile tests and touting his nuclear program, not because his nation is under threat, but because he needs a constant stream of fear to keep his friends close and his enemies closer.

The entire missile crisis is manufactured by the regime to instill FEAR that will help Kim Jon Un maintain power. If the crisis spirals out of control, then Kim plans to use the fear to his advantage.

Are the South Koreans willing to die to keep Kim Jong Un from obtaining power? Are the Japanese? Are the Americans? Because Kim is certainly willing to allow everyone in his country to die for his thirst for power.

If the people in South Korea, Japan, and America do not have the stomach for the kind of battle that kept Hitler from taking over the world, then there are very little options against the FEAR that is certain to overtake them and lead them down irrational roads.

But there is a New Hope.

Back to Jerusalem missionaries are ready to lay down their lives. Kim Jong Un is ready to kill and the missionaries from China are prepared to be killed. Just like their leader Jesus Christ, the Chinese are willing to sacrifice their lives so that the lost might hear the message of the cross and be saved. The armies of the Lord stand ready to engage the enemy on his own territory and spread the only message that can defeat fear – HOPE. Jesus’ message of hope and love is the only thing known to destroy the weapon of fear.

Maybe we are seeing the actions of Kim Jong Un growing more extreme because he knows his time is limited. Maybe his strategy of fear is losing power. Maybe the enemy sees the message of the cross taking hold in North Korea and is using Kim Jong Un to maintain power for just a little longer.

It could be that the threat of nuclear annihilation is a final ‘hail Mary’ pass into the end zone before revival breaks out.

The power of the Dark Side is no match for the Good News of Jesus Christ. That is why BTJ missionaries continue to take Bibles into North Korea. Now we are providing a special kind of Bible for children in North Korea!

The only message that can defeat fear is HOPE – and together we can bring hope to the people inside North Korea!

If you agree that Christians should not give into the spirit of fear and would like to help bring more people inside North Korea to the knowledge of Truth, please follow the link below and donate today.