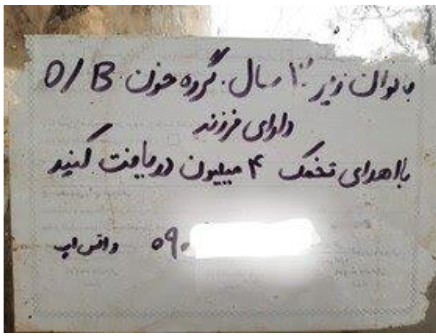 [Image reads: “Women under 30/ Blood group o/b who has children/ Get 4 million by donating an egg]

What happens if the poor can’t work to make a living? In many places in the world, there is a shortage of jobs, and people are unable to provide for their families simply by working hard. But the poor often have another valuable resource, apart from their ability to labour. The bodies of their women and girls.

If people will not pay for your honest labour, they may pay you for the body of your daughter or wife. Women’s bodies can do more than just work. They can be monetized for their sexual and reproductive functions.

Let me be clear that there is nothing good or excusable about using the body of any woman or girl in this way. It reduces a full person, created in God’s image with her own dreams, desires, needs and potential, to an object to take advantage of. It is destructive, evil and goes against God’s intentions for women’s lives. But because women’s bodies have these possibilities, it makes them vulnerable to this kind of abuse, if their families come under economic pressure.

Sometimes this pressure is ingrained in the social status of a group. In India, women from certain castes are ‘born for prostitution’. It is the only way they have been traditionally able to make a living, and girls are often pimped out when their age has barely reached double digits. Or they are expected by their husbands to go into prostitution as soon as they have had their first child.

Sometimes the pressure has to do with conflict and instability in a society. A few weeks ago, CNN did some in-depth reporting on the fate of young girls in Afghan refugee camps. With most of the foreign aid gone after the Taliban took over, some families have one way to eat; by selling their girls into marriage. Girls as young as nine are sold to become second and third ‘wives’ of much older men. They will be both a house slave to the older wife and a sex slave to the husband. Their sale can feed the family for a few months. After that, their younger sisters may face the same fate.

But even in countries where women have enjoyed better education and economic possibilities, women’s bodies are not safe from exploitation. Not just their sexual function, but also their reproductive function can be monetized. Carrying a baby for a rich couple in the West for example, can get a rural Chinese woman enough money to support her child through college. It’s a shady business and abuses abound, but what if your options are limited?

Iran is another example. Economic hardships in recent years have led to high unemployment and millions of families are struggling to eat. What if an advert on a bus stop offers you a couple of hundred dollars for harvesting your eggs (see photo)? That kind of money can make a big difference. But the price is also high. A woman’s body becomes a commodity as part of her is put up for sale. Or for rent, as happens when her womb is hired. As these practices are not legal, they are unregulated and there is no medical protection for women whose reproductive functions are monetized in this way.

As a church we must always resist this exploitation of women and girls and help families put food on the table with dignity. Recently a prostitute in Iran became a believer and was given a job in one of our women-led businesses. There are many more women and girls like her who do not need the church’ judgement of their ‘lifestyle’ or ‘choices’, but who desperately need the healing power of the gospel to transform their lives physically and spiritually. In God’s eyes, their lives are precious, their bodies worthy of respect and care and their tears known. May we reflect this love as the church of Christ.