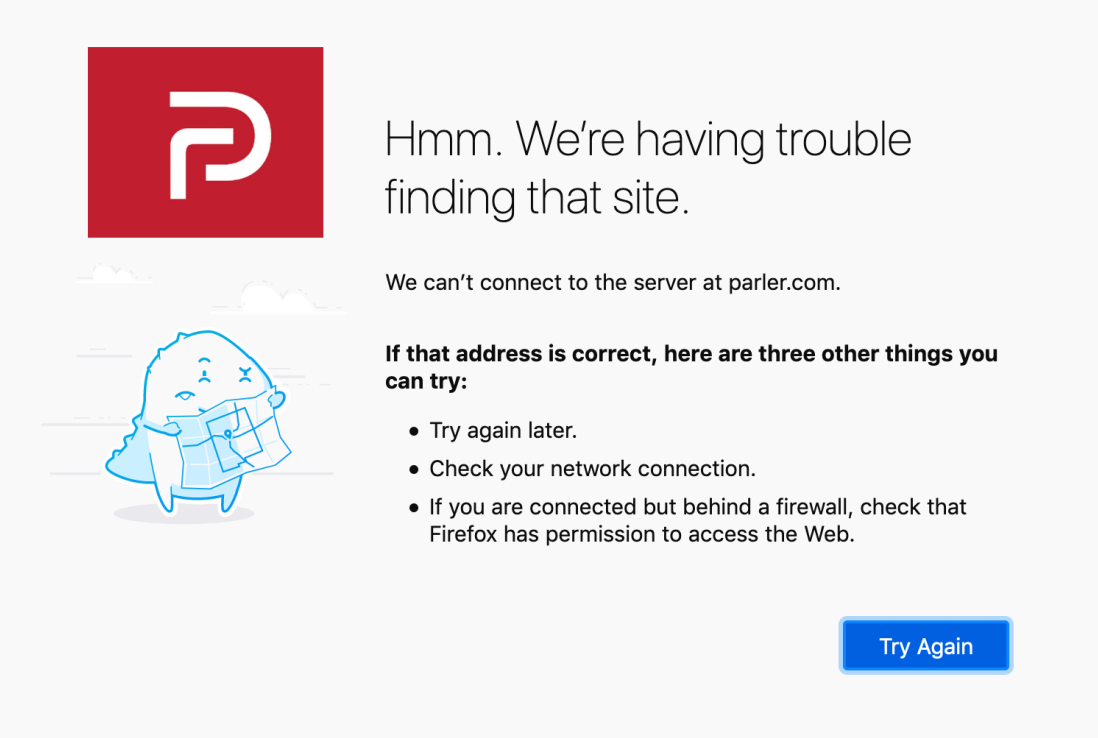 On Sunday night, the lights went out on Parler. Parler could not find servers for their website after AMAZON decided to no longer host them, but it was not just AMAZON.  For those who are waking up on Monday morning, they are learning that they cannot access their account on Parler.

According to the CEO of Parler, John Matze, everyone started to deny them service on the same day.

“Every vendor from text message services to email providers to our lawyers all ditched us too on the same day,” Matze said on Fox News. Matze conceded that the bans could put the company out of business.

“They all work together to make sure at the same time we would lose access to not only our apps, but they’re actually shutting all of our servers off tonight, off the internet.”

This has sent a clear chilling message to the entire business community and it is a message every Christian should be aware of. After many Christians from around the world have been banned, shadowbanned, and blocked from their social media accounts for sharing information with their friends, several have chosen to join Parler. Parler has been a social media sanctuary for many believers around the world, but tonight, that safe harbor has been cut off.

The power that Facebook, Google, Apple, and Amazon has is unfathomable and it is being unleashed on Parler. Not only can they deny service to a company, but other businesses also know that they too can become a target if they provide services which go against policies that are not endorsed.

This is the same strategy that the Chinese government has used in China with their social credit scoring system and is why DingDash has been working on a system that is smaller, more nimble, less centralized, and less vulnerable to these gestapo tactics.

Even though this collective action against Parler seems to violate several anti-trust laws, Facebook, Google, Apple, and Amazon spend billions of dollars per year to lobby the US government and other governments around the world. This makes the chances of them being held legally accountable for tonights actions against Parler almost zero.

It is clear that Parler is being held to an impossible standard because their service of free speech is a direct threat. Facebook live for instance, has been used to broadcast live murders on several occasions and has never been shut down as a result. Google search engines have been used by terrorists around the world to learn how to make bombs, home made explosives, and molotov cocktails and has never been accused of harboring terrorists. Apple phones were used by ISIS to sell sex slaves, arrange attacks, and film beheadings and were never shut down for being an aid to terrorists.

Parler being punished for protestors using their platform to coordinate attacks makes as much sense as arresting the CEO of Ford motor company, because their cars were used to transport drugs across the Mexico-US border.

Let’s be clear: the charges leveled against Parler are not legal, they are social. Christians who no longer want to have the values of social media giants shoved down their throats and control what they share with their friends have joined Parler in droves. This has angered the establishment and what they have done to Parler is an attempt to close any door of communication that they cannot control.

This is one of the reasons why BTJ created DingDash. DingDash is a social media platform that provides Christians with a free forum to communicate and interact. DingDash operates outside of the control of big companies and governments. You can learn more by clicking here.