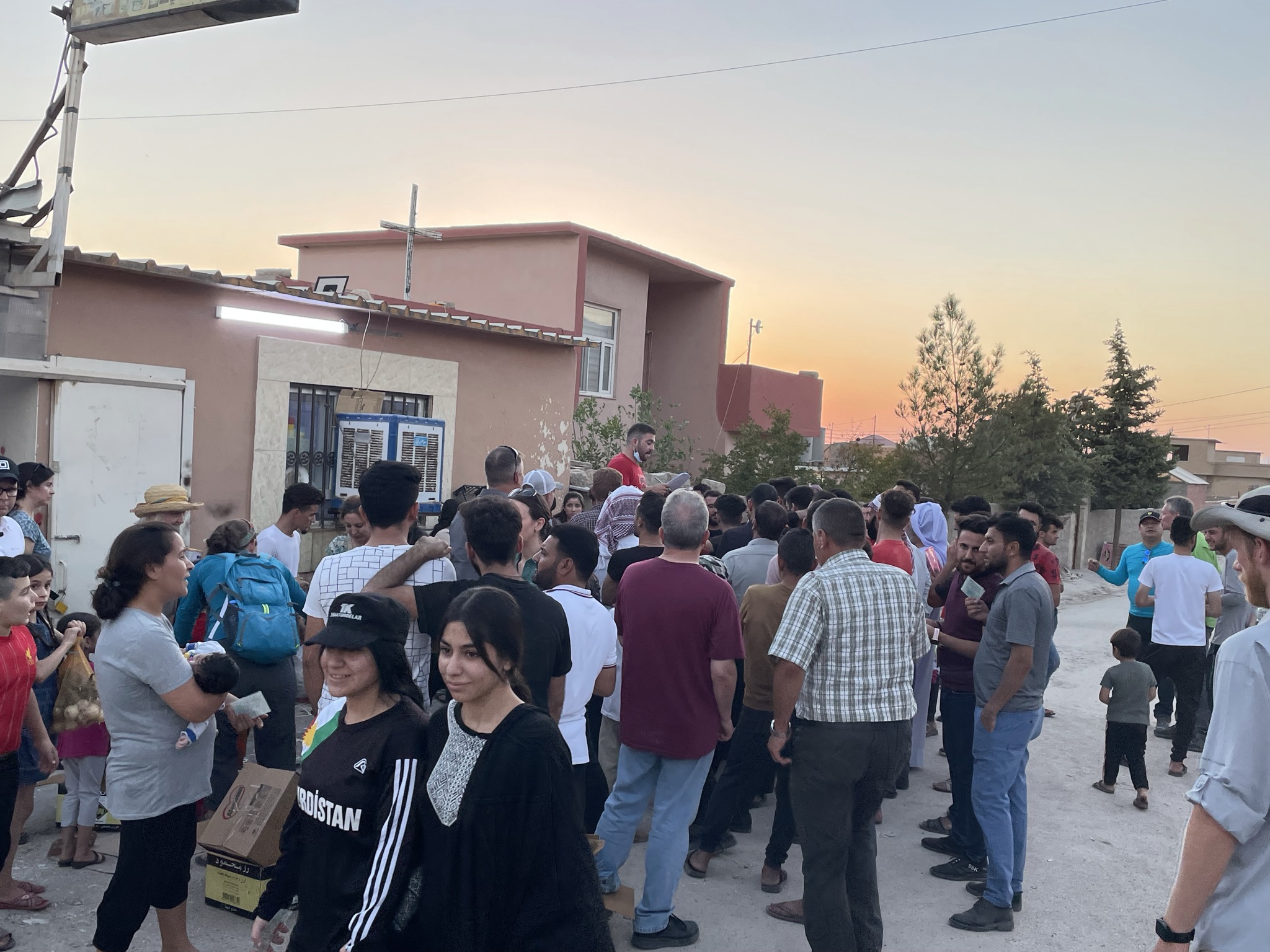 One of the reasons we had travelled to Iraq was to do a food distribution in some of the villages where refugees had settled. For most of us, we watched the horror of ISIS as it crossed our news screens, now only a distant memory. The same cannot be said for many living in Iraq, who are still faced daily with the consequences of the events years ago.

Many of the Yazidi’s (a minority group in Iraq) were forced to flee at the invasion of ISIS, and settled in a village that had been almost abandoned when its residents also left as ISIS moved toward the area.

The history of the Yazidi people is stained with Islamic persecution and violence, and the Yazidi’s remain a neglected people.

Despite the increasingly hot desert sun, our team worked to distribute food to 450 Yazidi refugee families.

We were able to hand out essential food items for fathers to take back to their families, to sit and talk with the women as they waited for their name to be called, and to play with the children as the hours went by.

Our team counted it a privilege to spend time with the Yazidi’s and to bring a small amount of relief to the burden of feeding their families in the coming days.

However, this was no ordinary food distribution.

The food that our team was able to distribute was provided by Chinese BTJ missionaries living and working in Iraq.

When Back to Jerusalem missionaries leave China and move into the mission field, they do so with the intention of becoming self-reliant. Relying on their leaders back home to send funding forever is not only unsustainable, but unsafe. Business provides the perfect platform for the missionaries to live and work on the field without any suspicion from authorities as to their true reason for being there.

In many ways, this was the Back to Jerusalem vision in action. Missionaries leave out of China into the 10/40 window, set up a business, which in turn provides the means to distribute food to a village of Yazidi refugees, allowing an opportunity to be the hands and feet of Christ in one of the most unreached areas of the world.

For many of our team, travelling to Iraq with us was not an easy choice. They left their families back at home to travel to the Middle East with no guarantee as to what the coming days would hold. Some might even call it irresponsible – and perhaps they’d be right. But, at BTJ we considered it an honour to travel with individuals who, despite the risks, were willing to serve together with us and carry the light of Christ into a land desperate for the hope of the Gospel.

We would love to see you join us on one of our Vision Casting trips. The next time we share about an upcoming trip, we ask that you would prayerfully consider joining so many others who have chosen to step out of their comfort zone and join us on the mission field to not only see what God is doing, but to be a part of it.