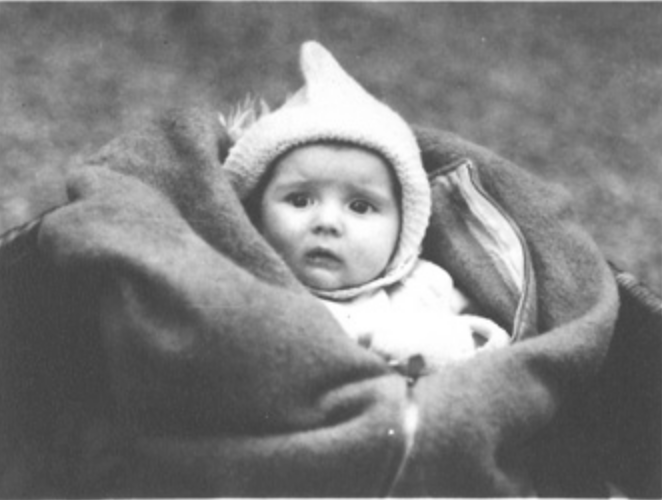 If there has ever been any doubt in the church about the anti-Christ spirit embedded in Marxist ideology, there is one powerful story of a ‘miracle baby’ from China which can help remove the uncertainty.

This is a story that has rarely been told. 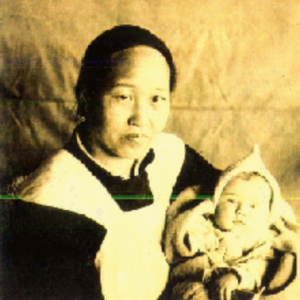 Above is a picture of baby Helen Priscilla Stam with one of the Chinese Christians that saved her from being killed by the Communists.

Helen Priscilla was born to missionary parents in China’s Anhui Province on September 11, 1934. There were complications with the birth, so Helen’s mother, Betty, had a caesarean section. After Helen’s birth, her parents John and Betty moved to a town called Jingde where they planned to serve local Chinese believers and preach the Good News of Jesus Christ.

This was not a safe time in China for John, Betty and their new born baby. China was in a civil war. Marxist teachings were on the rise on college campuses in China and there was a massive wave of desire to bring justice to China’s minority people. A young idealist by the name of Mao Zedong was helping to build an army of college students, factory workers, farmers, and peasants. He brought a message of social justice that would bring equality for women, minorities, and the working class people that had been held down by the rich bourgeoisie. 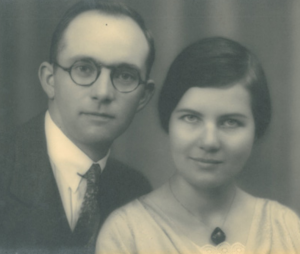 At 8 o’clock in the morning on December 6, a messenger delivered an urgent message to John Stam – Mao Zedong’s Communist army was approaching and they were less than five miles away.

There was confusion among church leaders at the time because the Communists stood for equality, justice, and equal distribution of wealth. These were arguably things that Jesus also stood for. Many Christians supported the rise of Marxist thought in the 1930’s because of the similarities it preached on justice and equality. However in China, Christian missionaries were all too aware of what was happening to Christians to the north of them in Communist controlled Russia.

John felt that it would be safest to take his family out of the city before the Communist army arrived, but it was already too late. The Stam family were about to learn what the Communist leaders meant by equal justice and it had no similarity to the Biblical version.

The Communist Red Army broke through the gates of the mission compound, raided the homes, the church, and the girls school of everything valuable and took the Stams as prisoners.

John wrote the following letter to the mission directors:

To our dear brothers in Shanghai:Today at Jingde, my wife, child, and I fell into the hands of the Communists. They demand a ransom of twenty thousand dollars for our release.

They have already taken all our possession, but our hearts are at peace, and we are thankful to the Lord for the small meal we were given tonight. May God grant you wisdom to know how to handle this, and may He grant us courage and peace. Nothing is impossible to Him; even at this time, He is our marvelous Friend.

Things happened all too quickly this morning.Many rumors in the past days have become reality at last. Nevertheless, the Red Army took the city in only two or three hours. There was really no time to prepare; it was already too late.

May God bless and lead you. As for us, whether by life or by death, may God be glorified.

The message was never delivered. It was later found crumpled up in some of baby Helen’s clothes. Another note was found where John detailed how he and his wife had been captured, then wrote, “Philippians 1:20: ‘May Christ be glorified whether by life or death.”

The Communists knew that John was a Christian missionary and they despised him and his family because of it. They passionately believed in the Marxist teaching, “Religion is the sigh of the oppressed creature, the heart of a heartless world, and the soul of soulless conditions. It is the opium of the masses.”

On that cold winter day, the Communist soldiers did not see John and his wife bringing good news to the people of China. They did not see the free education that they were offering to poor families who could not pay for an education or even the girls school that they were running to help take young girls out of systematic poverty. On that cold winter day in Anhui, the soldiers saw John and his family as opium dealers purposefully spreading the disease of religion in China.

The Stams were taken to a local prison where some of the prisoners were released to make room for John, his wife, and their child. The baby started to cry and annoyed the soldiers who then talked loudly among themselves to taunt John, by debating with one another when they would kill the baby. A Chinese prisoner who heard the taunting pleaded with the soldiers to let the baby go. The prisoner was told that they would let the baby live if he was willing to give his life for it. The Chinese prisoner offered his life for the life of the baby. The Communists hacked him to death and let baby Helen live.

The Communists did not know it at the time, but they were only at the beginning of their notorious Long March. The Long March is one of the most significant military events in Chinese history. It was a retreat by the Red Army to maintain the survival of the Communist Party in China. It was not really a long march, but instead a series of marches that started in 1934 and lasted for 370 days. Mao Zedong traveled with his army over 9,000 kilometers and during that time, many cities were attacked, many homes destroyed, and many Christians murdered.

The Long March is a significant event that is remembered every year in China. At the beginning of that march was the Stam family.

On December 7, the Stams were forced to march 12 miles to the town of Miaoshou where the soldiers stopped for the night. John was chained to a bed in an abandoned house and forced to stand throughout the night.

Betty hid the baby inside a sleeping bag. She may not have known it then, but she would never see her baby again.

The very next morning, John and Betty were marched through the streets of Miaoshou in a manner that would become very popular, once the Communist Party took power in 1949. The streets were lined with people as the soldiers encouraged them to yell at them, insult them, and even throw things at them for being Christian missionaries.

A Chinese shop keeper saw what was happening and stepped out of the crowd to beg the soldiers for mercy. The shame of mob rule was not enough to keep the shop owner from doing what he knew was right.

The Communists found his compassion oddly familiar. They had seen it before among other Christians. Immediately the commanding officer ordered that the shop keeper’s home be searched. When they searched his home, they found a Bible and a Christian hymn book.

The shop keeper was considered to be a member of the oppressing group. Not only was he a Christian, but he was a business owner. Business owners were part of the capitalistic oppressive class.

The Christian shop owner was ordered to march along John and his wife as the crowds yelled at them. After marching for a while and insulting the family for hours, the Communists finally stopped. They ordered John to kneel down. When he went to his knees, a sword was swiftly brought down and he was beheaded. His wife screamed out. She too was told to kneel down – at which point her head was removed. John was just 27 years old and his wife Betty was 28.

For reasons unknown, the soldiers never went back for two-month old baby Helen. For 36 hours, she laid alone where her mother Betty left her.

After two days, a Chinese believer and friend of the Stam family, Reverend Lo, went to the house looking for the baby. After seeing the disordered condition of the abandoned home, he entered the room where the Stams were held on their final night together. He stopped and listened. Soon he heard the very weak crying of baby Helen. He followed the sound until he discovered the location where Betty had left her. 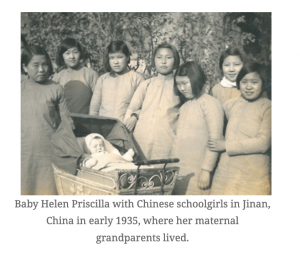 Inside baby Helen’s hooded Western-style two-piece jumper, he found the items of a loving mother. Betty had left her baby with several diapers, two five-dollar notes fastened with a safety pin inside her coat, some milk powder left beside the bed, sugar, and a few loving cookies.

It was all Betty could do for her baby, but God kept Helen safe.

Rev. Lo and his family carried baby Helen Priscilla in rice baskets through the mountainous regions of eastern China. They marched for over 100 miles with little food or resources to get Baby Helen to safety. After nearly a week of hiking day and night, they finally arrived in Xuancheng where they delivered her to a missionary headquarters. 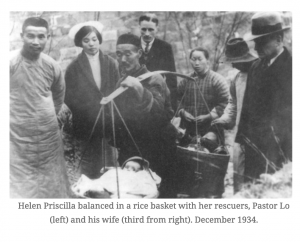 At which time this telegram was sent. “Stam Baby Safe.” 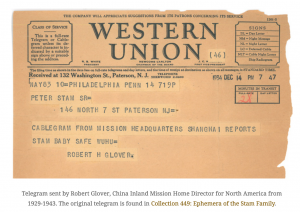 Baby Helen was transferred to the same hospital where she had been born three months earlier. She was examined by doctors and declared a “miracle baby.” Shortly afterward, the baby was sent to her maternal grandparents who were also missionaries in Jinan Province of China, where she lived until the age of five.

Baby Helen’s story is a powerful reminder that Marxist ideology has always waxed deadly for Christians and China is full of stories that we can all learn from. Unfortunately, the deadly ideology that has led to the killing of millions of Christian believers has been born again and again (and again) in the hearts of eager believers where history has no voice, but if we listen closely to China’s past Christians, they softly whisper stories that bring somber warnings.