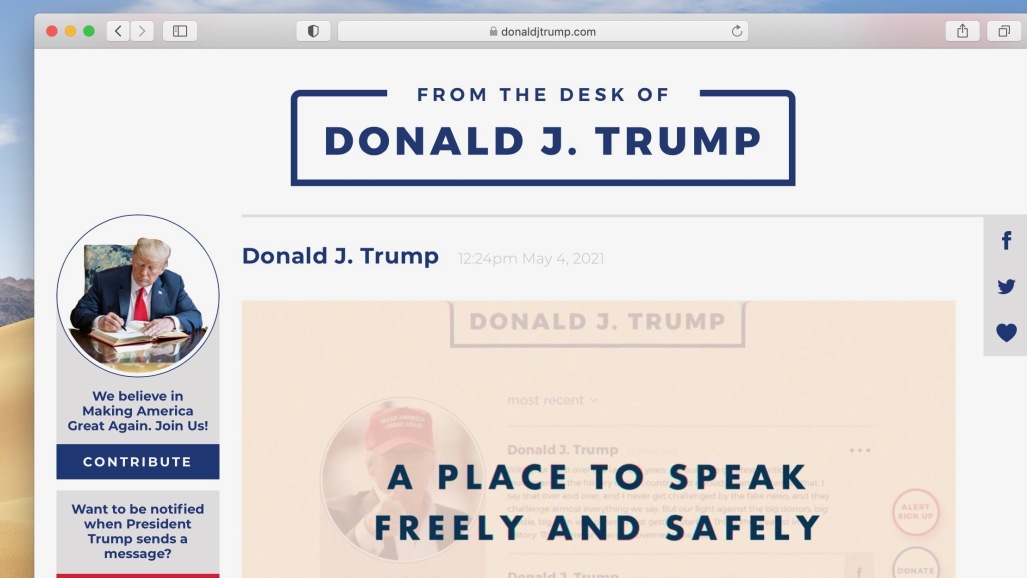 Thousands of users, including the former President of the US, were kicked off of multiple social media platforms in January of this year, including Facebook and Twitter, leaving many users to jump ship and move over to Parler. When Parler became a viable alternative, social media giants immediately maneuvered their power and engaged in clear racketeering to stop hosting services and had Parler shut down.

The power of the technocrats was on full display in 2020 and early 2021, with Christians being blocked and booted from their accounts for posting things that the higher powers did not like. Certain political, medical, and theological ideas were off the table and anyone violating the ‘rules’ was blocked, with zero recourse.

However, DingDash was able to ride out the waves and continue operating as a free speech forum for Christians around the world, in spite of the massive opposition.

In response to being gagged by social media giants, former President Trump, the most notorious and powerful victim of the technocrats, started his own social media-like communication platform called “From the Desk of Donald J. Trump.”

Only hours after it was launched, it was blocked on social media.

Many Christians have been waiting for a great alternative to Facebook, Twitter, Instagram, etc. Here are the reasons why From the Desk of Donald J Trump is riddled with problems and why DingDash is still a better alternative.

“From the Desk of Donald J Trump” … honestly? Is the name long enough?

From the Desk of Donald J Trump is not social. It is a one-way communication channel, so followers can’t respond or interact.

3. Not Immune – Not Even Close

The hope is that From the Desk of Donald J Trump can be shared on social media by followers, even though Trump’s personal account is blocked. The problem is, if social media wants to stop your voice on their platform, it is very simple for them to block your domain.

FTDDJT is hosted on CLOUDFLARE. It is still to be seen whether CLOUDFLARE is able to handle the heat under pressure better than AMAZON did when challenged by the attack on Parler.

For Christians who are looking for a free and open platform for communication, DingDash.com still offers the best alternative.

You can open up an account for free by clicking here.