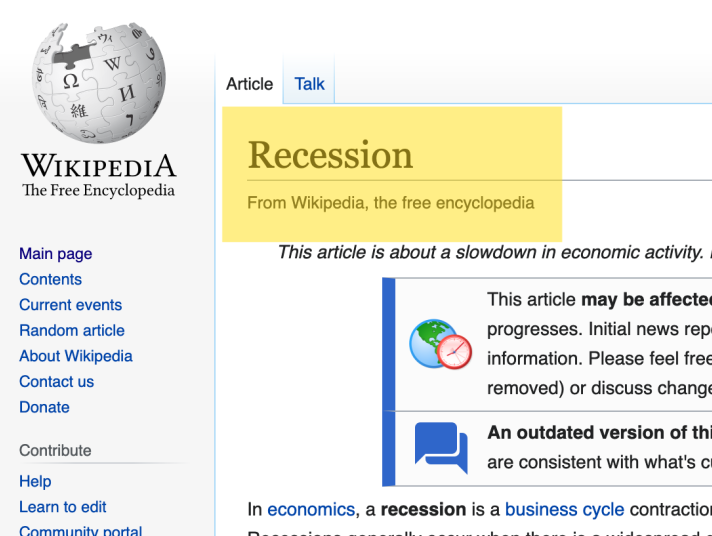 In a propaganda war, definitions are important. This is why the world’s largest encyclopedia, Wikipedia, has become a battleground with an unbelievable 41 edits and re-definitions in the past seven days in an unprecedented attempt to alter the historical definition of the word “recession.”

The war of words started on Thursday, when the U.S. Bureau of Economic Analysis (BEA) estimated that the U.S. economy shrank for the second straight quarter. The agreed upon definition of a recession has always been – according to Wikipedia one week ago – “two consecutive quarters of negative growth.” Now that the US is in two consecutive quarters of negative growth, there is a push to protect the current administration from criticism by changing the definition.

This is Chinese propaganda 101. In the 1950s, Mao Zedong waged a war on language and implemented linguistic engineering. By changing the meaning of the common vernacular, he was able to turn Christians into public enemy #1.

For instance, Christians were not faithful followers of Jesus Christ, they were “anti-revolutionaries.” Preachers did not share the Gospel, they gave ‘opium to the masses.’ Christians didn’t help the orphans, build hospitals, and teach the illiterate, they ‘disrupted social harmony.’

Changing the definition of terms, words, and ideas is essential for transforming a society. JI FENGYUAN of the University of Canterbury wrote, “The leaders of twentieth century Marxist regimes knew that if they were to create societies of virtuous revolutionaries, they would need to remake people’s minds – aggressively, systematically and profoundly. Without exception, they regarded control of language as crucial to the attempt. Lenin identified the Communist Party’s most critical task as ‘the selection of language.’ Stalin saw language as an important ‘instrument of struggle and development of society.’ And Mao instituted the greatest program of linguistic engineering the world has seen.”

The changing of the meaning of the word “recession” might seem trivial, but in China we have seen this war on words have a dramatic impact on Christians. In the West, we are seeing this attack on definitions for “woman,” “child,” “marriage,”… the list goes on and on.

In China, they have even gone so far as funding an effort to translate the entire Bible into a language that is more socialist friendly. China is redefining the way that Greek and Hebrew words are translated into the Chinese language, so that the meaning of certain passages can be more accommodating to the Communist Party.