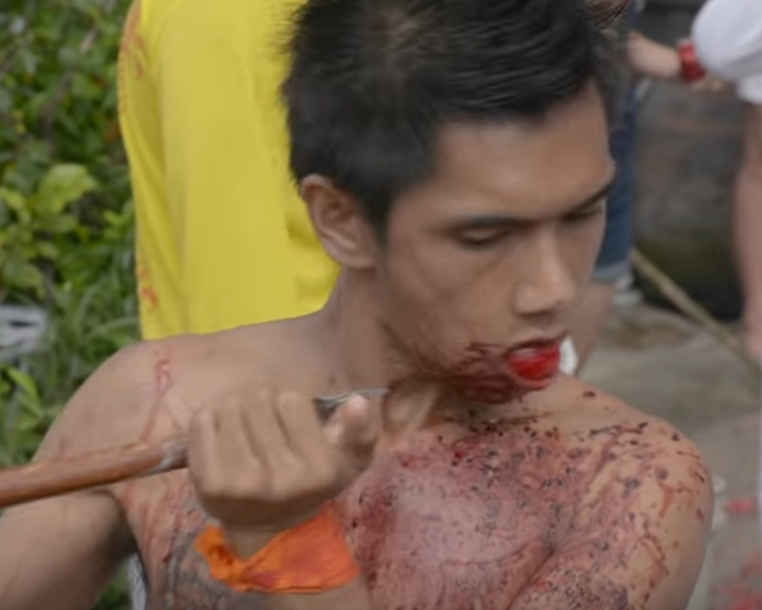 On Thailand’s island of Phuket, there is a sizeable Chinese population that practice a gruesome vegetarian festival which uses the act of self-mutilation to appease the Chinese gods.

This week starts the Taoist celebration of the Nine Emperor Gods Festival; a nine day religious ceremony where adherents invoke demons to possess their body. The religious ceremony is also known as the “Phuket Vegetarian Festival”, because the devotees eat vegetarian meals at the temple, recite continuous chanting prayers, and mutilate their bodies to prevent diseases. 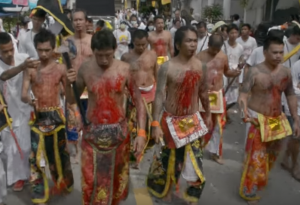 This year, during Covid-19, the ceremonies have taken special meaning. Yesterday, on October 19, the festivities kicked off with a strong desire to appease the gods and to ward off the pandemic.

Many of the Chinese on the island of Phuket trace their roots back to southeast China, where the nine emperor gods are revered. Locals joined the Chinese in their worship of the Taoist gods in 1825, when malaria struck a visiting group of opera singers from China. Since then, there have been annual ceremonies worshiping the gods. Many are hoping that the same spirits that helped them in 1825 will help them now in 2020.

The vegetarian festival demands that devotees do not eat meat and for nine days, they demonstrate acts of self-sacrifice such as forcing skewers and swords through their cheeks. Some slice the skin off of their body and stab themselves with different objects to show their devotion to the gods. Some are even known to permanently mutilate their tongues in the worship ritual. 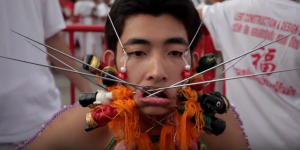 Video footage from yesterday shows demon possessed worshipers with their eyes rolled back in their heads as they go into a trance.  To see the video, click below:

“The key to this festival is for the people to observe the religious precepts, and rid themselves of meat consumption,” claims one man at the festival.

The self-mutilation can go to the extreme with some putting massive metal bars through their face, swords through their tongue, and even bicycle parts through their cheeks.  In the picture below, a man can be seen swinging his head from side to side, running his tongue against a sharpened axe. 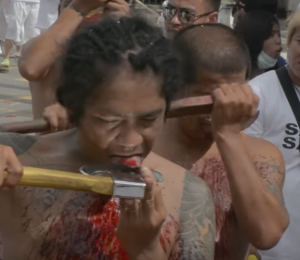 Locals claim that the spirits come and possess their bodies and makes the pain tolerable. Thousands attend the festivals and pay homage to the gods.

Thailand is in desperate need of the Gospel. BTJ missionaries have been working in Thailand for several years and partner together with rural village churches.