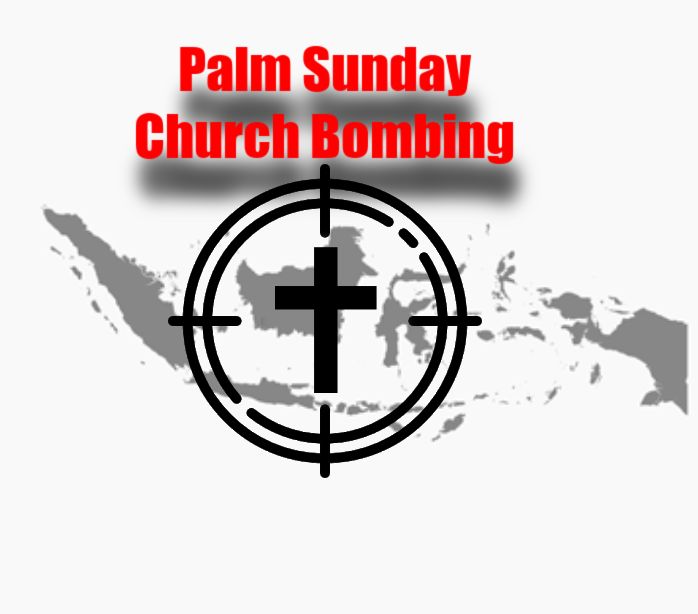 A bloody suicide bombing attack marked Palm Sunday in the world’s most populated Muslim nation yesterday. The attack happened outside of Sacred Heart of Jesus Cathedral as worshippers were leaving from a Palm Sunday service at the beginning of Holy Week. Palm Sunday commemorates Jesus’ triumphal entry into Jerusalem before His crucifixion at Passover.

“We see that there are victims and parts of human bodies have been torn apart,” said South Sulawesi police spokesman E. Zulpan, describing the 20 or more people who were injured in the blast. However, the disaster could have been much worse and a lot bloodier if it were not for the heroic actions of the church security guards.

The two suspected suicide bombers who carried out the attack are believed to be members of the Islamic Jemaah Anshorut Daulah (JAD), who were responsible for several deadly church suicide bombings which took place in 2018, and have also pledged allegiance to ISIS.

Many are just now learning about the bombing, but few are recognizing the heroes who prevented an even greater bloodshed from taking place – the security guards.

Church priest, Reverend Wilhelmus Tulak, said that there were two individuals on motorcycles who wanted to come into the church, but the security guards noticed something suspicious about them and would not let them come in. Once the guards were suspicious, the security detail went in to action mode, confronting the bombers, and blocking their entry. After being denied entry and identified as being suspicious, the bombers panicked and detonated their bombs outside of the security gates of the church, severely injuring the security guards and several other parishioners, but not killing anyone except the two suicide bombers. One of the suicide bombers was a suspected female.

The security guards were alert and their selfless actions saved the lives of countless believers yesterday.

I participated in a training exercise in Bozeman, Montana, with Calvary Chapel last month where the security team specifically trained for suicide bombers. The church security team in discussed the very same scenario of what happened in Indonesia yesterday. If you would like to learn more, you can listen to the podcast I did with Paster Dale Fricke regarding the need for church security and what Christians can do to prevent attacks on believers and their families. The podcast is posted below.

Our prayers are with the Christians who were injured yesterday and the security guards who risked their lives to protect those families attending Palm Sunday services.