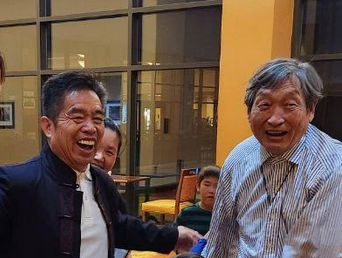 The “Billy Graham of China” Peter Xu dropped in for a surprise visit at the Back to Jerusalem Voice of the Persecuted Conference in Dallas Texas over the weekend.

Peter Xu is the founder of the largest underground house church movements in China. He is one of the eye witnesses that watched Brother Yun, also known as the Heavenly Man, walk out of China’s most maximum security prisons in Zhengzhou.

No one knew that Peter Xu would be coming to the conference. He showed up as a surprise to the BTJ team and tag-team preached with Brother Yun. The dynamic duo shared with the audience about their time in prison together and how they praised Jesus while being persecuted for their faith.

During the conference, Brother Yun and Peter Xu went out to eat and while at the restaurant, they found several Chinese workers that were not Christians.  They preached the Gospel to them and asked them to pray in the middle of the restaurant and give their lives to Christ.  “They didn’t have time to wait to be invited to Sunday service,” Brother Yun says.  “Salvation is too urgent to wait!” 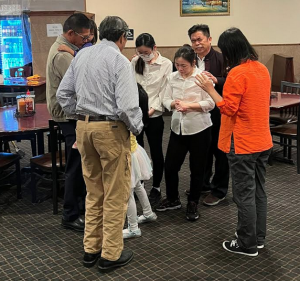 For the first time in our history, BTJ hosted VOICES OF THE PERSECUTED CHURCH CONFERENCE to highlight the testimonies of underground house church leaders from China, the Middle East and Africa.

Speakers such as Brother Yun and his son Isaac Liu from China, Mariam Ibraheem from Sudan, Naghmeh Panahi from Iran, and Esther from NK brought the power of the Holy Spirit with them as they talked about being arrested, detained, and tortured for their faith in Jesus Christ.

Naghmeh did a live video call on stage with evangelists from the underground church in Iran as she spoke to the crowd. The precious believers gave a live update from Iran to the intimate crowd at the conference.

This once-in-a-life-time conference will most likely never happen again, but we praise God that we were able to witness all these giants of the faith in one place. No donation was collected at the conference, but out of the generosity of their hearts, the attendees gave more than $30,000 USD at the book tables to support Bibles for the nation of Iran.