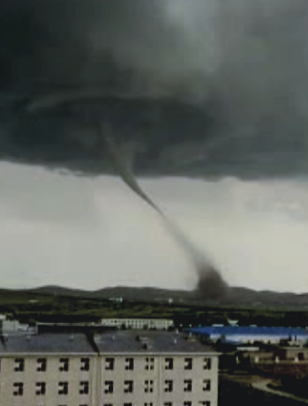 OK. This is starting to feel spiritual. Disease, pandemics, floods, tornadoes, and earthquakes have all hit China this week.

Where to even start?

Fear immediately struck many people in the city as Beijing’ers shared on social media. Chinese can be very superstitious about weather events like this. Video of this can be seen here: 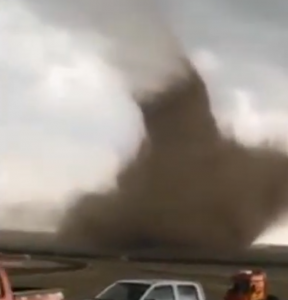 These are the strangest tornados ever caught on camera. Giant dark pillars of wind clouds ripped through northern China near the town of Xilinhot, Inner Mongolia. You have to see the footage to believe it. It looks like the mix between a tornado, wind storm, and miniature hurricane. You can see the video here.

In the video, menacing wind clouds can be clearly seen descending on the city and ripping through highways. In this video, instead of a large funnel cloud in the sky reaching down to earth in a tapered way, this funnel cloud oddly comes out of the sky like a lightening bolt and forms a funnel cloud below it, many times it’s width. 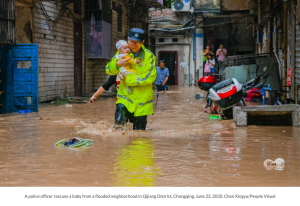 In Chongqing, the southwestern capital of western China and city of 30 million people, is experiencing the worst flooding in a hundred years. At 15 feet above the flood line, the water has risen to the highest point ever recorded by the local hydrological monitoring station.

However, mother nature is not done in Chongqing. Torrential rains continue battering nearly 2/3rds of all of China right now. Hundreds of thousands of people are currently being evacuated. Countless homes have been destroyed and so far, 39 people have been killed or have gone missing. 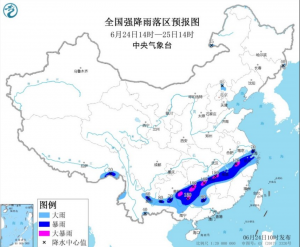 More rain is predicted to hit the areas that are already flooded. From western Guizhou Province, all the way up to Shanghai on the east coast, monsoons have been forecasted. China has been told to brace for heavy rains and strong winds. 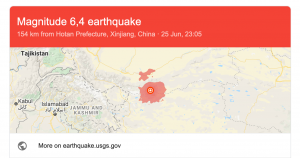 A powerful 6.4-magnitude earthquake rocked China’s western province of Xinjiang yesterday. There have been no reports of death so far from this earthquake, but many locals are sleeping outside of their house fearing the tremors that have come afterwards. 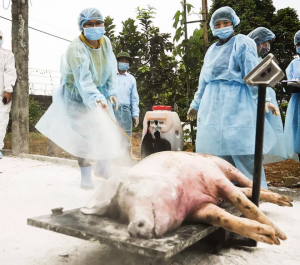 Though the world has been focused on the Chinese-born coronavirus, it is actually the Swine Flu that has brought massive destruction. The Swine Flu, a deadly disease that has impacted the pork industry in China, is responsible for killing almost half a billion pigs. Pork is the primary meat consumed by the Chinese on a regular basis. China also relies on their pork for the export industry. The Swine Flu is hitting them hard.

Each one of these events would have made major headlines in China and around the world this week, but all of them together happening at the same time has made it difficult to comprehend.

Many might chalk this up to a very bad coincidence in weather phenomena. Some might blame global warming or the end of times. Whatever the reason might be, China is seeing some very difficult times right now.

If you would like to keep up to date with events taking place in China with the underground house church, please click here.