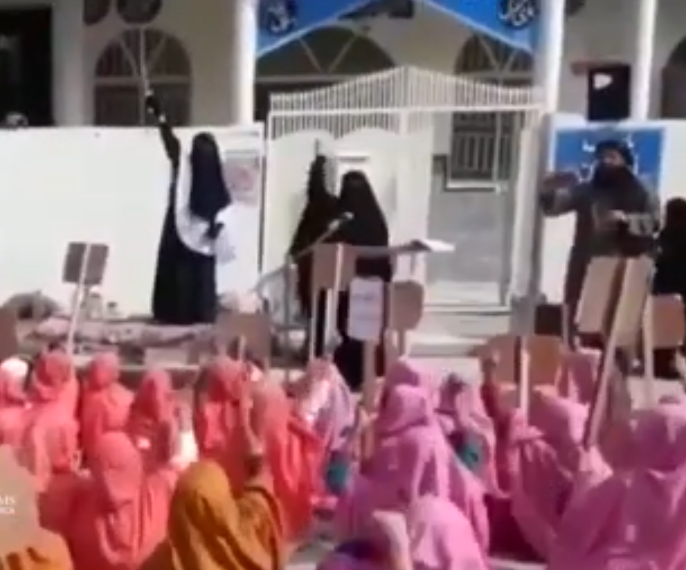 Shockingly enough, at the writing of this article, the video was available on YouTube with no warning or age restriction. Meanwhile, many Christian videos with Biblical teaching about homosexuality, transsexual lifestyles, or abortion have been either removed or blocked. Even videos with simple polite political discourse have been removed by YouTube as hate speech – BUT THIS VIDEO SHOWING HOW TO BEHEAD AN INFIDEL IS ALLOWED.

The female teacher, dressed in a full black Islamic burka, raised her sword in victory after having shown the young girls how to cut off the head of an infidel.

This teaching was not in the Taliban held areas of Pakistan bordering Afghanistan, but in the capital city of Islamabad. The Islamic world is riled up, not because of the killing of innocent Christians in a church in France, but because the French President has not condemned cartoons depicting the prophet.

The fact that YouTube has allowed this video, while shutting down Christian videos, is a sign of the strong bias. This is why BTJ created DingDash.com. DingDash is a social media platform which allows Christians to have freedom of speech when they have been censored by big corporations like YouTube.

Christians must understand there is a spirit behind these videos that we are up against. Islam, as practiced in the nations between China and Israel, is growing more aggressive as the last days grow closer, but it is not the Muslims that we fight against. Muslims are the prisoners who must be set free.  We fight “not against flesh and blood, but against principalities, against powers, against the rulers of the darkness of this world, against spiritual wickedness in high places.”

Islam has to use violence in order to maintain power, derived from fear. BTJ missionaries are going into these nations, like Pakistan, to bring a message – not of fear – but of Love, Peace, and Truth.  The Gospel message is the only thing that has the power to set the captives free.

If you would like to support these efforts in nations like Pakistan, please consider becoming a GateKeeper. BTJ GateKeepers are partners who stand together with BTJ on a monthly basis. To learn more, click here.