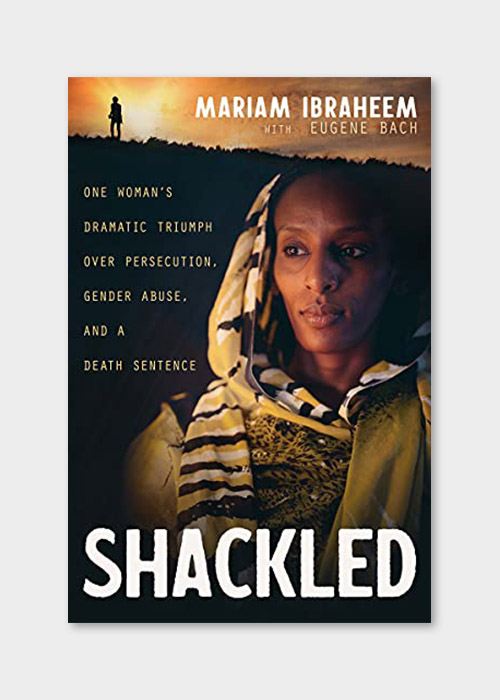 Today is INTERNATIONAL WOMEN’s DAY and for this special day, we are releasing BTJ’s explosive new book – SHACKLED – about the life and testimony of Mariam Ibraheem.

SHACKLED is the miraculous testimony of a mother, wife, Christian daughter, and Sudanese death row survivor that will shake you to your core and is a must read book for every Christian in 2022.

Mariam Ibraheem was born in a refugee camp in Sudan to a refugee mother and an abusive father who was on the run for murder. After a traumatic childhood, Mariam became a medical doctor and a successful businesswoman, following the dreams of an ambitious mother who was determined to give her children a better life than she had.

Mariam’s world turned upside down when she found herself on the wrong side of Sharia Law, when the Sudanese Islamic government insisted she was Muslim and demanded that she deny Jesus and pledge her allegiance to Allah.

Mariam’s amazing story shares how one woman shook off the shackles of fear, clung to her faith in Jesus, faced down one of the most oppressive governments in the world and refused to be broken. Even after being sentenced to 100 public lashes and death by hanging, she clung to her faith, protected her children, and refused to deny the name of Jesus Christ.

Mariam Ibraheem took a stand on behalf of all women who are maltreated because of their gender and all people who suffer from religious persecution.

SHACKLED IS NOW AVAILABLE.  CLICK HERE TO BUY THE BOOK!

If you would like to hear Mariam tell her story live, you can join the BTJ tour this week in the US!  You can find more information below: