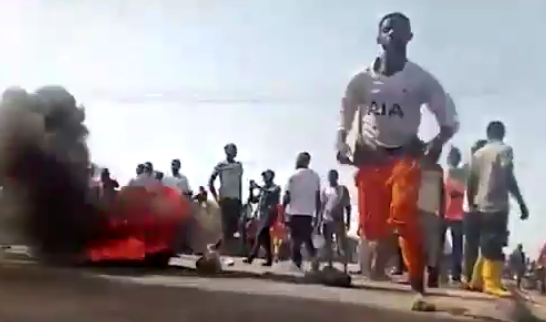 It was another sad week for Nigeria’s Middle Belt. In Kaduna State, an Assemblies of God church was burnt down, and eight Christians were killed by ‘bandits’ on Wednesday.  Many of the attacks on Christians are blamed on bandits. This makes it look like a crime problem instead of a problem of the growing influence of Islamic extremism. The government is keen to deny that a war is fought against Christians.

Bandits, which are organised criminal gangs, are certainly a problem. But bandits tend to abduct people and keep them for ransom, while this was an attack where people were randomly shot, and a church and several houses were burned. Attacks like these are often staged by Fulani militants. Fulani militants are members of the Muslim Fulani tribe, who are often armed by international Islamic terrorist groups. They seek to cleanse the area of Christian farmers, so they can enlarge their territory.

It has been a bloody year so far in Nigeria in general and Kaduna State in particular. 1470 Christians have been killed in the first quarter of this year. 300 of those were in Kaduna State, which makes it the state with the highest number of deaths. It was also the state with most kidnappings, 800 from January to April, of which 600 were of indigenous Christians.

Meanwhile, in Niger State, to the West of Kaduna, 15 people were kidnapped and 3 killed by suspected Boko Haram terrorists over the weekend. The blatant and unchallenged actions of these terrorists have prompted protests on Monday. Several hundreds of mainly young people blocked a major highway in Niger state, to try to get the attention of the governments for their demands of better security. People can no longer sleep at night for fear they will be taken from their houses or shot. Or they fear wearing new clothes for if they are perceived to be rich, they could be targeted more readily. Thirty people have been abducted from their community so far this year. One local person told how wives are left begging to pay ransoms for their kidnapped husbands and children. And one husband was killed as he tried to protect his pregnant wife, who was subsequently kidnapped.

Nigeria has the largest population in Africa by far and is situated on the fault line of Africa’s mostly Islamic North and mostly Christian South. The terror groups that are active in Nigeria, threaten the peace and security of Christians in neighbouring countries as well. Let’s keep praying for Nigeria’s church to remain strong, brave, faithful and wise as they face this enormous challenge. And may the Spirit of Comfort be with them in their grief.