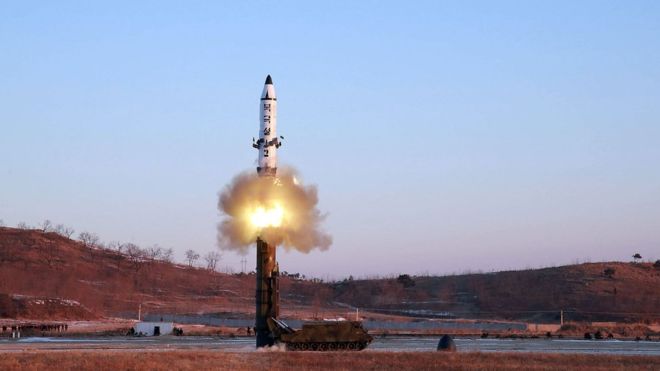 The US is twenty years too late to recognize the seriousness of the threat of North Korea. Although there have been many attempts in the past to negotiate, North Korea never was a major priority. It was believed that the North, with the strong US-South alliance in place, would never start a war they could not win. And their arsenal was not a direct threat to the safety of the US. That has now changed, but so has the power balance in the world, and not to the US’ advantage.

The US also does not want another war, but it has some tough options. Standing up to North Korea is playing with fire, still I personally feel that the hard language and show of force from the side of the US may be necessary. Because as long as the North believes that the US will never attack, they have no reason to negotiate or give in to demands.

If there is to be any hope for peaceful negotiations, North Korea must feel that there is something at stake. However, not drawing a definite red line I think is a smart move. Although uncomfortable risky in many ways, an unpredictable, untested and undiplomatic president of the US may be what Kim Jong Un needs to change his game.

The perspective of North Korea’s regime is simple. They want to stay in power and feel they need the bomb to make that happen. Nuclear capabilities will be a good deterrent against an attack from the US, which they mistakenly seem to believe is what the US has been planning all along. A bomb will give them great blackmailing powers, trading aid for keeping sweet. Also, they will be able to make money selling their technology to questionable regimes in the Middle East.

Meanwhile the ordinary North Koreans suffer material hardship because of the enormous military spending of their dictator, they have no freedom and many suffer unthinkable oppression. For them, this situation has been urgent for a long time, but it has taken nuclear tests for the world to pay some real attention. Will the present crisis lead to changes for the good? Or to more decades of the same suffering? If successful negotiations would lead to many more years of Kim rule, is that better for them than risking the chaos of conflict with the hope that may lead to freedom?

What should we pray?