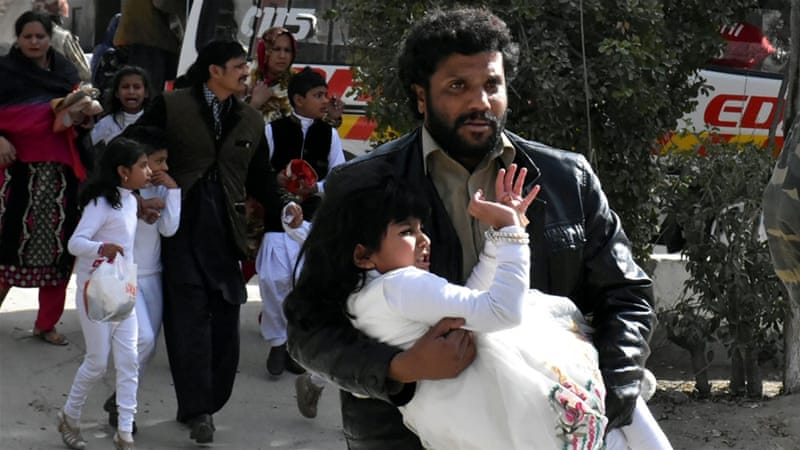 Yesterday I attended a Christmas service for children in my church. Scores of little angles, shepherds and wise men, excitedly and nervously acted out the greatest miracle in the universe, God being born as a baby.

Christmas is a feast of innocence. A virgin girl becomes pregnant, her loyal fiancée stays with her as she becomes mother of the only sinless human that ever lived, holy angles sing, poor shepherds and mysterious kings arrive, a star shines. But we know what happens afterwards. Herod kills all the under twos in and around Bethlehem in an attempt to assassinate the new King, as innocent celebration turns into deadly violence.

The tactics of evil have changed little. This morning four hundred people gathered in the Bethel Memorial Church in Quetta, Balochistan, Pakistan to hold a Sunday school Christmas celebration. Pictures show beautifully dressed up children, very much like the children in my church yesterday.

They were not allowed to rejoice in innocence. ISIS made good on their threat to attack churches during the Christmas season and two suicide vest wielding terrorists showed up. Thanks to the armed security guards, they could not enter the building, but they did shoot at people and one detonated his suicide vest. Nine people were killed and over fifty injured, nine of which are in a critical condition.

In another evil twist, it was reported that those that showed up to murder children, were barely adults themselves. They are thought to have been 16 and 20 years old.

‘Pakistan Today’ mentioned that this was not the first time the church had been under attack. After the previous attack, more severe security measures had been implemented, but as these things go, vigilance was not as high anymore. Now the government has promised to increase security at churches for the rest of the Christmas season.

The Balochistan area has been troubled for a while now, with regular insurgents from neighboring Afghanistan and several large ISIS terror attacks in the past two years. Only six month ago, in the same city as today’s attacks, two young Chinese missionaries were abducted and murdered by ISIS.

As ISIS’ murderous ideology continues to claim victims, what can we do? Christmas is also the feast of vulnerability. A poor young girl, forced to give birth in a stable, with only some cloths to protect her newborn from the cold. His life and death would be marked by rejection and suffering. A suffering experienced by many millions of his followers today.

‘We are counted like sheep to be slaughtered’, Paul writes in Romans 8. But he goes on, ‘In all of this we are more than conquerors’, as ‘nothing will separate us from the love of God’. May that truth be known by all our brothers and sisters now grieving and hurting in Pakistan.