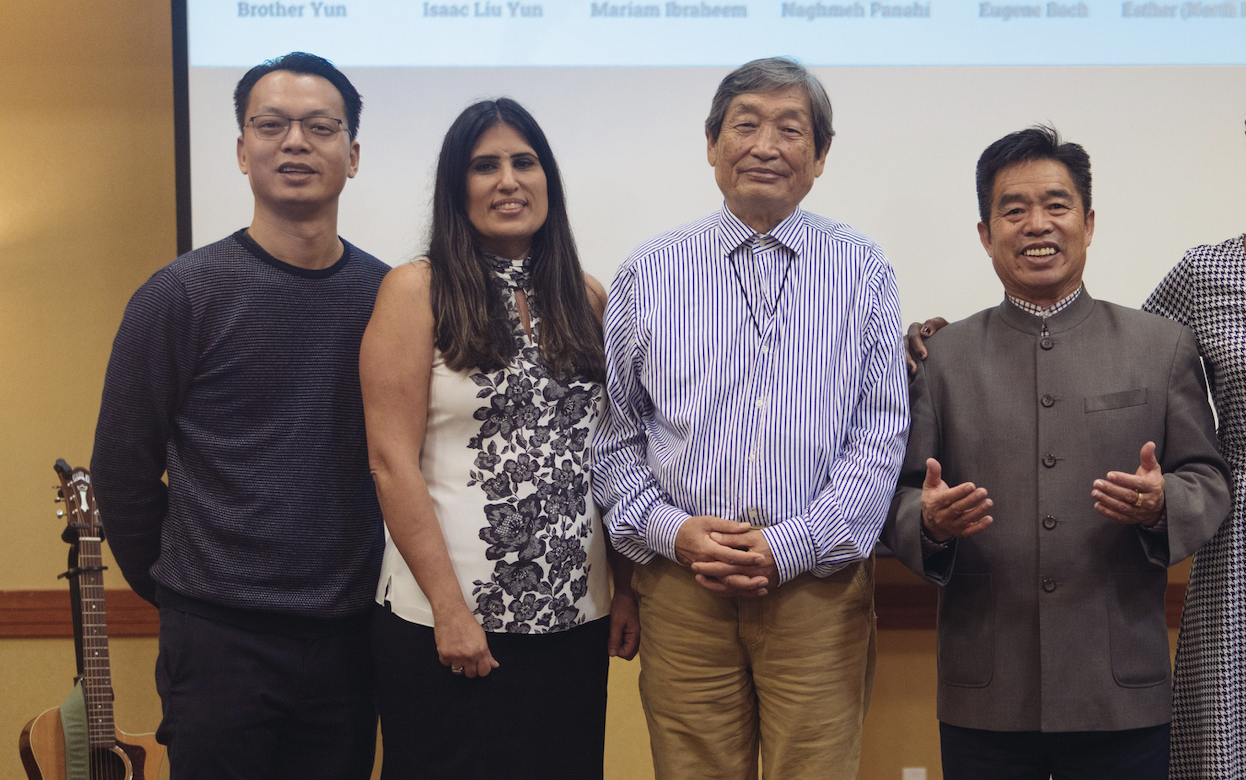 MESQUITE, Texas — Naghmeh Panahi immigrated to America with her family as a young Muslim girl and began following Jesus at age 9, to the horror of her parents. (They later became Christians as well through reading the same Bible they’d taken away from her.) Panahi would return to Iran as an adult. At the Voices of the Persecuted Church Conference near Dallas last month, she spoke about her experience as a pastor’s wife within the underground church in Iran. She recounted how God allowed her to preach the Gospel before world leaders and the United Nations, via her advocating for the release from prison of her then-husband.

The next day Panahi spoke again, conducting a live call with a persecuted Christian woman about her time in solitary confinement.

A Plan to Share the Gospel While in Solitary Confinement

“As I was in that prison, scared as a 20-year-old and just not knowing what was coming — the torture and abuse that was coming my way — I was reminded of a Psalm that probably all of you know, Psalm 23. As I was reminded of this verse, I knew many would come after me who would need the word of God,” the woman said in Farsi. (Panahi translated.)

The woman found a little rock in her cell and wrote Psalm 23 on the wall. She said it took about 10-14 days to write the entire psalm, as she was careful to write it clearly. She could imagine those who would come after her. “I have prayed it would be used by God to bring many to salvation.”

“One thing that always surprised me about the persecuted church that I work with is that they never want self focus. It was never ‘Poor me. I lost this. … I was tortured. I was raped. This happened to me.’ They would just get up, shake off the dust and just keep sharing the Gospel.”

Panahi highlighted the resiliency of the church in Iran. Iranians understand that they’re losing their rights by becoming Christians. “One thing that always surprised me about the persecuted church that I work with is that they never want self focus. It was never ‘Poor me. I lost this. … I was tortured. I was raped. This happened to me.’ They would just get up, shake off the dust and just keep sharing the Gospel.” Panahi referenced the 2019 documentary Sheep Among Wolves. It highlights the characteristics and realities of the persecuted church in Iran, including the fact that it’s largely led by women, whom she said are “considered second class citizens by the Iranian government.”

Panahi emphasized two things the Church in the West can learn from the persecuted Church: Gospel focus and prayer.

“We’ve heard amazing testimonies,” Panahi said. She referenced Hebrews 12, which begins, “Therefore, since we are surrounded by such a great cloud of witnesses, let us throw off everything that hinders and the sin that so easily entangles. And let us run with perseverance the race marked out for us.”

“What should we do?” Panahi asked, comparing the speakers before her to the “great cloud of witnesses” — the fellow believers in heaven whose stories of faith encourage us. “What are you supposed to do? Are you supposed to be like ‘Wow. Those are heroes of faith?’ No.” As Christians, we all have the same calling to fulfill the Great Commission. “We’re not special Christians,” she said of her fellow speakers. “We’re just Christians.”

Panahi said that after she and her twin brother got saved at age 9, her parents got saved too. Within a year of her parents giving their lives to follow Jesus, 50 of her relatives began to follow Jesus too. “All out of Islam. All with a last name of ‘protector of Islamic law’: Shariat Panahi.”

“I realized at that age that we can reach people here that can impact places all over the world,” Panahi said, referencing her work with refugees. “I have seen Iraqi Muslims come to know Christ in my city. One family took about 20 years. I would take the little 2-year-old to church and then in his 20s he bowed down and accepted Christ. … I was just in their life.”

One way Panahi gets involved in refugee communities is by teaching them English. She then asks for an opportunity to share the Gospel. She says she is not trying to convert them because only God can do that. She can only give them an opportunity to hear the Gospel. “They see how I love them and serve them regardless of if they accept Christ or not. And over the years I’ve seen fruit. So one thing that I want to encourage you is: You don’t know the one life that you’re going to impact here, that they’re going to, like my family, take it back.

What are We Supposed to Do With the Stories We’ve Heard?

“What are we supposed to do?” Panahi asked again. “We’re supposed to lay aside every sin, every encumbrance, everything that entangles us. Whatever it is that’s holding us back. It could be our … focus on this world. It could be that we’re … so affected by politics. Our hope is in people and things. It could be personal sin. That we’re watching things we shouldn’t be. We’re wasting our … money and time on things we shouldn’t be instead of focusing on the Gospel.”

[Please Support The Stream: Equipping Christians to Think Clearly About the Political, Economic, and Moral Issues of Our Day.]

“God spoke to me, ‘What are you supposed to do, Naghmeh? Now you’re in America.’ You know, we can clap for people in China and Iran and all over the world, but what is our call here? And I was reminded of this. ‘Lay aside everything that entangles you.’ And because of these testimonies of our brothers in China, Sister Esther, Miriam, we are supposed to get encouraged to run our race.”

To those who feel that God is done with them because of their older age, Panahi said that experience with God is valuable. “Please don’t buy into this culture that as you get older you’re supposed to retire and you’re no longer useful. You’re actually more useful and more powerful for the kingdom of God.

“I just want to encourage you: There’s a race that’s set before you.”

How can Christians further the Gospel in their own contexts? Fix your eyes on Jesus, Panahi said.

“This conference was started by Brother Yun saying, ‘God loves you,’” Panahi said. “The persecuted church — they’re being persecuted, but they know how they’re loved.”

‘They Don’t Get Bored’ With Talking to God

The second thing we should learn from the persecuted church, Panahi said, is prayer.

“If you come to the underground church in Iran, a lot of time is spent in prayer. Sometimes six, seven hours. They don’t get bored,” Panahi said.

“You know when you first fall in love and you want to talk to someone six, seven, eight, ten hours a day?” she asked. “That passion to just talk to God and just tell him, ‘Look Father, they’re persecuting me. Look Father, they just arrested your sister. Look Father, they’re doing this. Pouring out their hearts to God.” She said that before the house churches in Iran exploded, “the main thing” they would do is prayer walking. “A lot of times we would just go to different cities and we would just pray. That’s it.”

Panahi told a story to emphasize that we can come to God with confidence. She said when she was in the White House waiting to speak with President Trump about her then-husband’s imprisonment in Iran, Ivanka Trump walked past her directly into Trump’s office. The other staff were not so bold. “God is so much bigger than Trump — than any president. I am His daughter.”

Panahi encouraged listeners to learn to enjoy God and to sit at Jesus’ feet, as Mary of Bethany sat at Jesus’ feet. “Really focus on your prayer life. A lot of people say, ‘How do we prepare for the persecution that’s coming?’ It’s prayer.”

Originally published at The Stream and reprinted with permission.