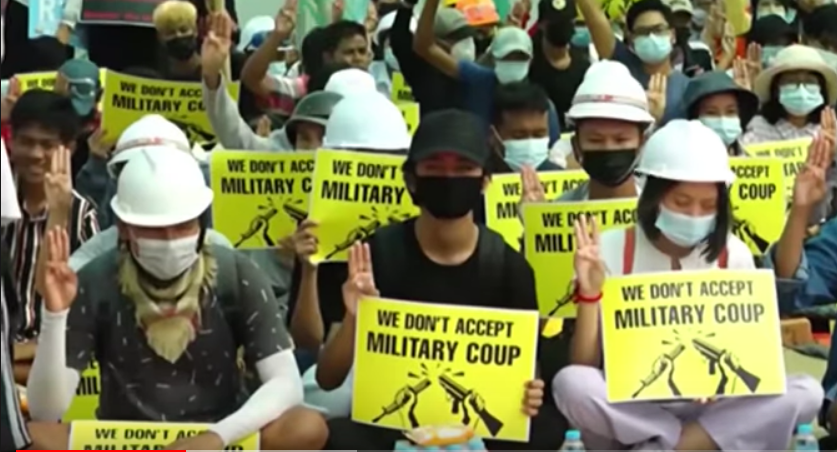 Myanmar had long been in the grip of a brutal military junta. But in 2011, democratic reforms began. A year later Aung San Suu Kyi, who received a Nobel peace prize for her non-violent resistance against the regime, won a seat in parliament and was elected as leader of the nation in 2015. The country seemed to be firmly on the path to democracy.

But the military remained an important force in the government, holding a quarter of the seats in parliament. During the elections last November, they backed the opposition party. When Suu Kyi’s ruling party won decisively, General Min Aung Hlaing alleged voter fraud. On February 1st, Suu Kyi was arrested, and the military took back power in a coup. They claim they will hold ‘free and fair’ elections within a year, but that does nothing to pacify the furious population of Myanmar. After all, they just had free and fair elections, but the military refused to accept the outcome.

Since then, Myanmar’s people have protested peacefully against the military coup. Young people especially feel that their future is on the line. They want freedom and democracy, not a regression to the brutal military rule their parents suffered under. In a great display of unity, workers across professions have gone on strike, mothers and children bang pots and pans and grandmas keep watch at night when the military tends to move into neighbourhoods to round up people as they sleep. Meanwhile, thousands of young people risk imprisonment, torture, and death as they join in peaceful protests.

In recent days, the tactics of the military have become more brutal. Live rounds are fired on protesters, killing more than 100 in different towns, and some have been killed while in detention. Thousands have been arrested with their whereabouts unknown. Martial law has been imposed in parts of Yangon, giving the military power to act with impunity.

Many of the dead have been boys and girls in their late teens or university students. This weekend, 15 students from the Student Christian Movement Yangon were detained. The young protesters use social media where possible to spread pictures of the dead and the missing, as well as sending encouraging messages to each other. It is not always easy, because phone reception is frequently cut off and so are Internet services.

What can we do in the face of violence and injustice? First of all, take it seriously. This conflict has the potential to turn into mass killings of unarmed protesters, and the targeting of ethnic minority groups, who have joined the resistance movement. International initiatives to hold the military accountable are important to prevent it going down this road.

Individual Christians can pray and show solidarity. Because social media are so important in this protest, we can do our share to help amplify voices of people who suffer. Many accounts share information in English. Another worthy initiative is from an American missionary who has lived in Myanmar and is helping to organise free online trauma counselling and mental health support for people traumatized by the violence. You can follow her on Twitter for updates and ways you can support the victims of violence @randallbreanna.