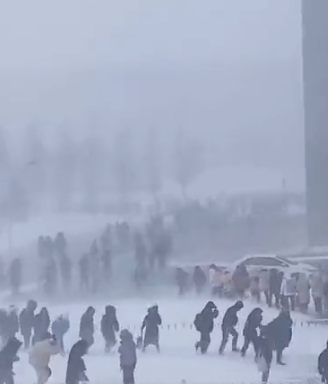 The extreme weather plagues of China have not relented. Mother nature often does things that wreak havoc on nations, but what is happening in China does not seem natural – it seems… supernatural.

The weather phenomenon in China this year has been so crazy that it could be categorized as a plague straight from the Bible, but now there are parts of China that people have described as looking like a “Game of Thrones” episode.

Extreme blizzards have hit northeast China. Click on the picture below to watch the video. 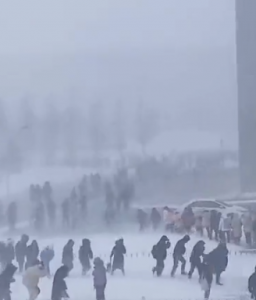 Extreme gale force winds swept through the city of Harbin with such speeds that a cleaner is forced to crawl across the road, in order to make it to the other side. Click on the picture below to watch the video. 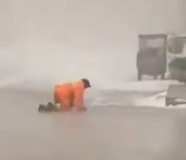 In another city, Changchun, massive ice storms hit so hard that the water and electricity were shut down, trees were destroyed, and roads were blocked. Click on the picture below to watch the video. 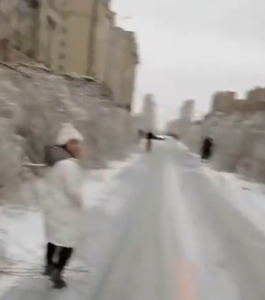 This has been a difficult year for China. Even if we do not look at the coronavirus (a freaky virus that started in China and has now shut down the entire world), there are things that have happened in nature which defy our understanding of extreme weather.

Plagues struck every province of China. Almost every part of China has been hit with extreme floods – the worst nationwide floods on record. In some parts of China, it started raining and raining and it just didn’t stop. Entire cities were under water. Hundreds of millions of people were displaced. Crops vanished. Buildings were destroyed.

Yes, you read that correctly – the Bubonic plague as in the black death – as in the deadliest disease in the history of mankind that wiped out the majority of the earth’s population in the middle ages.

If this is all starting to sound a little Revelation-y, “The first angel sounded, and there followed hail and fire mingled with blood, and they were cast upon the earth.” (Rev 8:7a)

China also had massive hail storms with hail the size of baseballs dropping out of the sky and destroying millions of dollars of property. The spooky part is that the hail was in the shape of the coronavirus.

China had more than half of the world’s pigs, but not anymore. Another plague, the Swine Flu, resulted in hundreds of millions of pigs being killed. China lost trillions of dollars with 300-350 million pigs killed.

Tired of reading about extreme plagues in China? Just imagine how China has felt having to live through them every month this year.

Just when China thought that they had seen every disaster, in come the earthquakes that happened almost every day during the summer.

Locusts! This is where the Biblical imagery comes to life. Locusts hit China hard like something straight from the book of Exodus. Any crops the floods, hail, or earthquakes did not destroy, the locusts came for. Tens of thousands of acres of crops in northeastern China, Western China, and southwestern China were destroyed by a plague of yellow-spine bamboo locust. They destroyed about 120,000 acres of crops in Yunnan Province alone.

The swarms of locusts were so thick, that they looked like a dark cloud when they were flying. It really is reminiscent of the plagues that hit Egypt in the book of Exodus.

To deal with the destruction of crops, China has asked people to not waste food and have just taken drastic steps to raise the retirement age to ease the economic situation and possibly prepare for a long, dark winter.