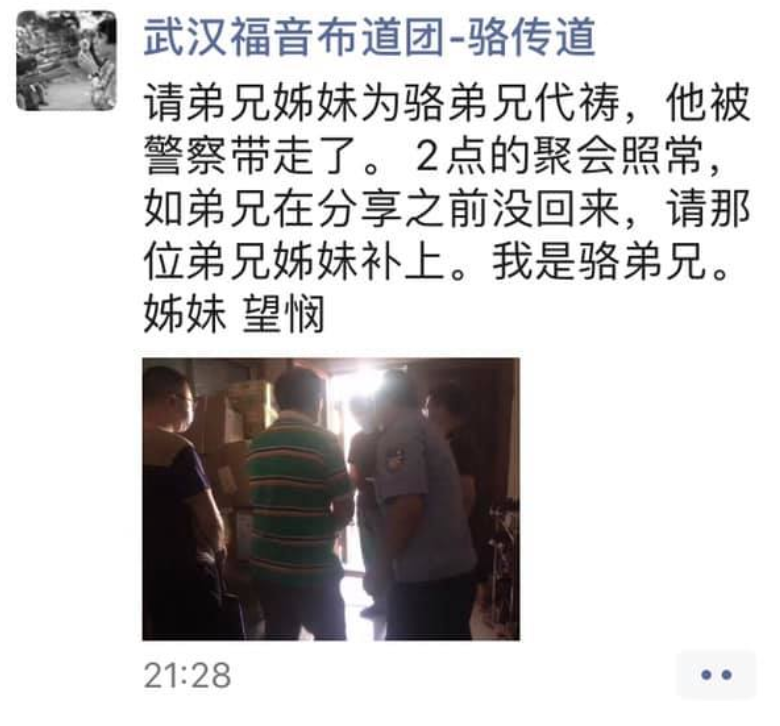 It has happened again. A pastor’s home in China was raided and he was arrested while using ZOOM.

A Christian preacher, identified as Pastor Luo from Nanjing Road Church, China, was dragged away by police in Wuhan over the weekend during an evangelical event on Zoom, according to a report posted on Facebook by the Chinese Christian Righteous Fellowship.

This raid comes just one month after an Easter Service was raided in China while using the same video meeting platform – ZOOM – leading to the arrest of six believers from The Early Rain Covenant Church.

International Christian Concern (ICC) reported the “Proclaim Jesus Gospel Gathering” on ZOOM was an all-day event with a morning and afternoon session, and the police showed up around noon to “look for evangelism materials or publications before taking Luo away.”

“Christians disregarded their own lives to do good things, yet the police treat them as the bad guys, this is unreasonable,” Pastor Luo was quoted saying by Fox News. “I also told them a few times in all seriousness,” Pastor Luo continued, “I will only live for Christ, I will not argue on other matters. However, I will never change [my persistence] about evangelism.”

After using ZOOM for several months at BTJ, we have determined that this app is completely unsafe for ministries that work in closed countries, and unfit for Christian meetings.

Our recommendation is that ministries working in China should steer clear of using this video-conferencing platform altogether.

A team of researchers from the University of Toronto’s Citizen Lab, discovered that some traffic from Zoom was being sent through Beijing – even when participants on the Zoom call were in North America.

It was also revealed that Zoom has several hundred employees in China and that number is only growing.

While Zoom is headquartered in the United States, it was founded (and still headed) by a Chinese citizen. The company currently employs at least 700 workers in China and could be compromised by the government if access to the database is needed.

BTJ was a paying customer of ZOOM and we hosted our weekly meetings using the video-conferencing platform. BTJ reached out to ZOOM by both phone and email to ask if their software is open to the Chinese government. ZOOM could not answer the question in person or by email, so this month we have officially stopped using Zoom.

The good news is that we have found an alternative that is free, doesn’t require any software to be downloaded, and does not belong to a company operating in China.

BTJ switched over to Jitsi. After using Jitsi for only a short time, the question should be asked – “Why did BTJ ever pay to use Zoom in the first place?” !!!

Jitsi is everything that we wanted and more. It is a free open-source video conferencing and instant messaging platform that works with Windows, Linux, macOS, iOS and Android.

The good news is that Jitsi has been given a 5 star security rating by the user community. It allows for password protected video calls, and has no limit on participants (although you might be limited by your own Internet bandwidth).

Those that would like a higher level of security can run their Jitsi meetings on their own servers.

So, if you have been using Zoom and are looking for an alternative – Jitsi seems to be a great choice.