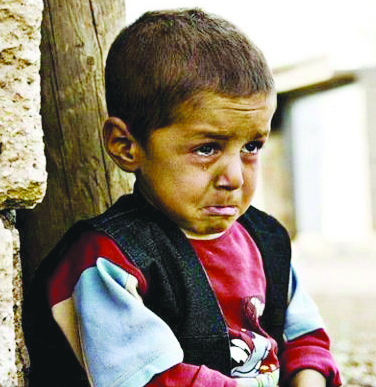 Where are the Christians?

Children are being taken from their homes. Where are the Christians?

Children are being sold into slavery. Where are the Christians?

Children are being forced to fight on the battlefield. Where are the Christians?

Children are being killed. Where are the Christians?

Bloodthirsty Islamic State militants force a young boy to execute a man accused of spying. A gun is put into his fragile young hands. The gun is not a toy. The adult male standing over him, instead of protecting the child, shatters his innocence by making the young boy witness a man’s brains blown out as he pulls the trigger. The boy needs someone to show him the love of Jesus Christ but maybe, just maybe, someone else will do it. Or maybe not.

Moments later the boy is seen standing over the body of the dead man. Grown men, trained for battle, return from war with PTSD (Post Traumatic Stress Disorder) and many of them commit suicide because the images haunt their dreams. How much more will this boy be impacted? The dreams of this boy are sure to be filled with the violent realities of this day but maybe, just maybe, there is a government somewhere that will do something about it. Or maybe not.

25 children were marched behind 25 prisoners. 25 children were given guns and forced to point those weapons at the back of the heads of the 25 prisoners. Each child, one by one, pulled the trigger, and duly executed every prisoner. 25 young lives will never be the same but maybe, just maybe, ISIS will run out of ambition one day and just…stop. Or maybe not.

A young boy, no older than 12 years old, is given a gun during the Speicher massacre, where the waters ran red with the blood of 1,700 people who were killed. Standing on a bloody platform, with a gun in his hand, he did what few 12-year-olds have ever been asked to do. He pulled the trigger.

74 small children heard the rumbling in their tummies during Ramadan, a period of time of fasting during the day.

They did not know that their lives would be required of them if they had a small bite to eat. One by one, the small children were executed for eating during Ramadan. Their laughter will never be heard again. They will never play pretend games outside of their homes again. They have been forever silenced. Their blood calls out, but who is there to answer?

Thousands of children have been kidnapped from their homes. Tonight, many of them are sleeping in dark rooms that are not their own, tears streaming down their faces, wishing they were in the safe embrace of their mothers and fathers. Some of them are being raped over and over again. They are crying out, but who is there to hear their cries?

The time has come to end this insanity. Evil has never been as raw and violent as it is right now with ISIS. Real men and women of God must stand together and say that enough is enough. ISIS must see a united front of Christendom put a wall between them and the children until every child is safe. An arrow must be thrown through the heart of Islam by the power of Jesus Christ and darkness commanded to depart.

Christians cannot remain silent one day longer. Pentecostals, Methodists, Anabaptists, Baptists, Eastern Orthodox, Catholics, Lutherans, Presbyterians, etc have to put aside their theological differences and mount the largest spiritual attack that has ever been assembled.

Back to Jerusalem missionaries are on the ground and many more are preparing to go. They need your prayer, financial support, and partnership.

You can donate for Iraq here: