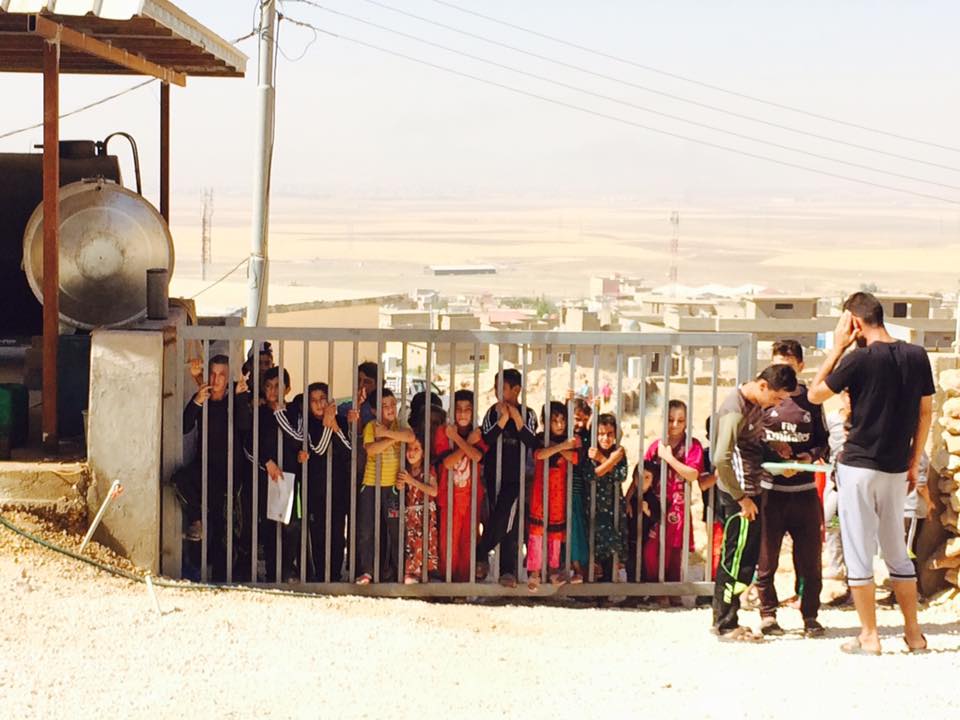 I left my hotel in Dubai in the middle of the night, boarded an airport shuttle that took me to one of the terminals, and sat with a coffee at the Arrivals Hall. It was around 3a.m., much quieter than the usual hustle and bustle of an international arrivals hall in daytime. As I sat there waiting, I began to think of the responsibility of the team I was about to lead; a missions team that consisted of women from various churches in the United Kingdom, who had responded to the Call of leaving their home for a short time to go and make a difference in a foreign land.

This was not the traditional mission field; this was a mission where many of those soon joining me were warned by well-meaning loved ones not to go.

It was the first ever BTJ Mission trip through BTJ UK.

Within a short time, I was joined by eleven women from the UK. Within a couple of days, we would be in Iraq, in territories that were previously occupied by ISIS; each day meeting widows, orphans, and others who had been affected by incredibly evil atrocities.

We were joined by a team from the US and spent time together in Dubai before flying to Erbil. Our time in Dubai was very special, as we met a young pastor and were invited to speak at one of their cell groups just outside the city. It was an honour to minister the word to people who were once Sikh or Muslim, but now loved Jesus. The meeting was attended by some from the UK team and we worshipped together. That evening, the Lord brought healings and miracles to our meeting.

The following day, we flew to Iraq.

In a previous visit to Iraq with Brother Eugene, ISIS was much closer and occupied Mosul. The atmosphere was tense, and at times we were only a short distance from ISIS. At one time, my taxi driver took a wrong turn and headed straight into Mosul, but an Kurdish security check-point guard instructed the driver to turn around and drive back in the opposite direction.

This time, the atmosphere was not as tense, as ISIS was fleeing into Syria. What they left behind, however, were not only the ruins of a city, but souls that were empty, eyes that were dark and hearts filled with hopelessness.

This BTJ Missions team was made up of around twenty-four people, primarily from either the UK or US. Our journey took us past Mosul to a region in Northern Iraq. Though this area had not been impacted by ISIS, the people we were to meet had all come out of a war-zone.

Over the next few days, the mission consisted of supporting Dr. Paul and the local project of gathering food, filling bags, and preparing them for distribution for many Yazidi families. It was a feeding programme that helped thousands of people who had fled ISIS. On this particular day when we were feeding the Yazidi people, I was asked to keep an eye on the lines of people, young and old, and to make sure no one pushed in. The heat was intense and yet people stood in line for hours waiting for some food.

When they reached the area to receive food, bags of vegetables as well as rice were passed over a wall to them. At times, I noticed young children of only six or seven years trying to pick up large bags of food, trying to carry them to their families. For many it was too much to carry; it broke my heart, as I could only watch. I could not leave the line for fear of other young children or elderly being pushed to the back of the line.

The day before, our UK team brought luggage full of clothing, shoes, and childrens’ items, such as sweets and colouring books, etc. The shoes were the first to go. Many simply had no shoes, and trying to walk on the heat of the sharp rocks and rubble was painful. Within an hour they were all gone – the need was great. It was emotionally difficult for our team of women to inform young children that we had no more shoes to give.

Clothing was being distributed and everyone was thankful for the donations and support which made this possible. In the midst of 90-degree heat, it was easy to forget that winter was only weeks away; the cold of night was fast approaching.

Along with the distribution of food and clothing, a Medical Clinic was set up. Included in the team from the UK were doctors and nurses. They served in a small room addressing the medical needs of the Yazidi people. The resources were limited, but what was available in abundance was prayer. Every Yazidi that went into the Medical Clinic was prayed for; many received healing. It soon became a Holy Ghost Hospital in the middle of the Iraqi desert.

The days were full and emotionally draining, but the hearts of every member of the missions team were incredible. Most people did not know each other at the start of the trip, but unity, support, and laughter was shared. It was precious fellowship.

One day, we had the opportunity to visit the places where the Yazidis slept. Each of these people had a story; all had to flee their homes, and most lost many family members. They stopped in this region and moved into abandoned buildings. These buildings were owned and being built by Kurds who fled when ISIS drew near. The Yazidis now used these empty structures as their homes. Most were unfinished, no windows, no roofs.

We broke into two teams and visited many homes. The Yazidi people were wonderful and kind hosts and, according to their custom, treated us as their guests. Most only had a little water to give us, though some had tea. We were prepared and able to bless each home with some gifts. It was during these visits that people began to open up about what had happened to them. There were accounts of torture, rape, seeing family members killed, and tales of walking days on end without food or water, trying to reach safety.

In one home, as we sat, I noticed a woman in her mid-twenties sitting with us. It was a surprise, as there were very few women in their 20’s or 30’s in this region. A whole generation had been ripped out by ISIS. Women of that age were either dead or held captive by ISIS as sex-slaves. This young woman asked through an interpreter to speak with me privately. I agreed, and, along with a translator and a female member of the UK team who is a pastor’s wife, went onto the roof. We sat down and she shared her story…

When ISIS came into her village, her family tried to flee, but was captured. She was sold to an ISIS member and raped repeatedly. Within a few days she was taken to the market place at the centre of an Iraqi town and sold to another man. She lost count of how many times she was sold from one man to another, standing in line with other women, and children as young as six, waiting to be sold to an ISIS fighter.

At one time, she was sold to a man who took her to Turkey. Eventually this woman ended up being taken to a camp and trained to use weapons and small arms. The following months she found herself in the middle of war. She shared of many killed, she witnessed many children massacred, and stated that for a year, without even one bath or wash, she was forced to commit terrible acts. She saw everyone acting like wild animals.

Eventually she escaped, and walked over mountains with no food or water until she came to the region where she now stayed. As she spoke, she kept saying how disgusted and angry she was with herself. She felt dirty, and knew that no one would want her after her slavery with Muslims.
Soon she stopped speaking, and the pastor’s wife could minister to her. She informed this Yazidi woman how beautiful she was to God, and how much she was loved. These were words that had never been spoken over her – she looked away as tears filled her eyes…

There on that rooftop, she was led in a prayer and asked Jesus into her life.

Sitting there on that rooftop I was reminded that no matter what the custom, language, or culture, the name of Jesus is relevant to every soul on this planet. To be told that God loves them, to be informed that they are special, and precious to God are words that can touch the very being of a person, despite their past, no matter the circumstances…

Then there were the Yazidi people we met, who we played with, laughed with, smiled with, and prayed with. The images of these precious ones will not be forgotten.

We met many incredible people, such as Dr. Paul Kingery, and a woman called Barbara, from the USA, who has pioneered a language centre. We met an amazing pastor who oversees churches in this region. He brought his daughter with him, who was nine years old. He shared of how the church was doing, and how he has talked with many Muslims who have met Jesus in their dreams and received Him into their hearts. He also shared of all the death threats, including from Hamas, based in Gaza. He lives each day loving Jesus and the people, and knowing that one of these days may be his last.

These are people about whom no books have been written, by whom no worship cd has been produced; tv cameras are not following them – but according to Heaven, they are generals. These are people who daily walk in the supernatural, in the realm of angels – Just as those in China and Iran. I often think of Christians in the West who will drive hours to hear a Christian celebrity, or book a conference ticket to hear a Man or Woman of God. What contrast to the Disciples here, and in many ‘closed’ nations, who are seeing the book of Acts come to pass daily.

Upon meeting together back in Dubai, each mission team member carried their own personal account and experience of the Iraq Mission – all would come back, all forever impacted as they trod the roads and paths of Abraham, Isaac, Jacob, Jonah and many other prophets of old.

This was not a ‘tourist-type’ missions trip, but a mission where we all got our hands dirty. We distributed food and clothing to the needy and hungry. We all held children who had not washed in months, we sat beside women and children who have suffered countless rapes and abuse. This was 21st century Missions. This was Church.