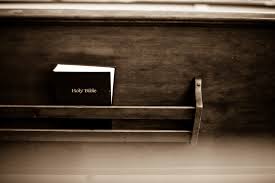 In my opinion, it would be pretty hard for any tale to match the awesomeness of the illegal Bible printing story told by Brother Ren at the beginning of Eugene Bach’s The Underground Church (available here on the BTJ website). That said, I once heard a story that does come close, if not in terms of sheer daring, then at least in terms of humour, irony and overall coolness.

Almost ten years ago, I was fortunate to take a class in European history with a Godly professor at my local university. Among other things, we covered the Protestant Reformation, particularly the life and work of the famous Bible translator, William Tyndale. If you don’t know much about Tyndale, then simply consider that the much-loved and cherished King James Version of our English Bible probably wouldn’t be what it is today if not for William Tyndale! He didn’t contribute to it directly, of course. The KJV wasn’t published until 1611, long after Tyndale’s martyrdom in 1536. However, what he did do was in some ways much more exciting.

Tyndale produced, as far as I know, the very first English translation of the New Testament, as well a partial translation of the Old Testament. And, those early translations served as very influential source material when the famed Authorized Version was being created under the reign of King James. However, they were highly illegal in Tyndale’s day, when England was still firmly under the control of the Roman Catholic Church.

Rome opposed the translation of the Bible into the common tongue, largely because they held themselves to be the sole interpreters of Scripture, and the rightful guardians and exclusive distributors of Divine Truth. Enable the uneducated masses to read the Bible, and you would end up with nothing short of religious and spiritual anarchy. Interestingly, not all Catholics actual felt this way. Famous Humanist Desiderius Erasmus, who was a loyal Catholic, actually wrote in favour of translating the Scriptures into a language that everyone could read and understand. However, the official leadership of Rome felt quite differently, and they were willing to go to great lengths to defend their position. In fact, one English citizen was famously burned at the stake for possessing a mere hand-written copy of the Lord’s prayer.

In the middle of this chaos and opposition, Tyndale completed his translation of the New Testament and began printing and distributing it illegally throughout England. Tyndale’s New Testament, along with the gospel as preached by the Protestant reformers, spread like wildfire, just like it does in China and other nations that are closed to the gospel today. The more the Catholic Church tried to stamp it out and maintain their control, the more the message took hold in the hearts of people throughout Europe and the British Empire. Finally, the Catholic Church came up with a winning plan to stop Tyndale and thwart his efforts to distribute the Scriptures to the common people of England. Like all plans to oppose the works of God, it failed spectacularly. What was their master plan? Well, it wasn’t that easy for the authorities in England to simply seize the Scriptures that Tyndale was printing and distributing, because they weren’t actually printed in England. They were printed on the European continent and smuggled across the English Channel. No, they would need to be more creative to stop Tyndale.

What did they do? Honestly, I don’t know if you’re ready for this, but here goes: The Catholic authorities started purchasing New Testaments from Tyndale’s operation. Then, they burned them publicly. What a way to make a statement! Surely, this would be the end of William Tyndale and his illegal Bible printing shenanigans, right? Nobody would be at all inspired to track down and read this outlawed and deplorable publication that the Roman authorities were so keen to eliminate from the British Empire, right?

Wrong. What do you think Tyndale did with the income from all those New Testament sales? Printed and distributed more, of course! In their zeal to stamp out the spread of Protestantism, Rome became one of Tyndale’s best customers, and actually helped him spread the Word of God!

As Brother Yun might say, “Amen! Hallelujah!” It really is true that “all things work together for good to them that love God, to them who are the called according to his purpose” (Romans 8:28).

If you loved this story, then don’t forget to check out the story of illegal Bible printing told by Brother Ren in the introduction to Eugene Bach’s The Underground Church!