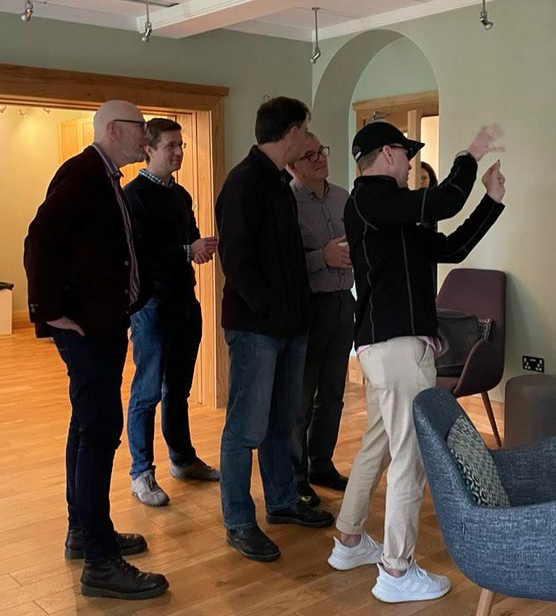 This week, we were able to share about our special BTJ pill-sized hologram Bible with the team of Tyndale House in Cambridge, UK.

Tyndale House, named in the memory of Christian martyr, William Tyndale, is a research institute housing one of the world’s most advanced libraries for biblical scholarship. In the filming of our new BTJ series, CHASING LEGACY, a team from BTJ traveled to the UK to learn more about the legacy of William Tyndale, who rebelliously defied the King of England and the church leaders of his day, to make the Bible accessible to the common people.

William Tyndale translated the Bible into English and had thousands illegally printed and smuggled into England to distribute to a hungry underground church, using methods and tactics that are not dissimilar to what BTJ is doing today in China, North Korea, and Iran.

During the days of William Tyndale, it was a high crime to translate even one sentence of the Bible into the English language. Men had been burned to death for simply carrying the Lord’s Prayer translated into English in their pocket. In order to help people stay safe with the Bible, Tyndale created small Bibles that were colloquially referred to as The Pocket Bible. He was eventually strangled to death and his body was burned at the stake for doing this.

The legacy of William Tyndale carries on in the mission efforts of BTJ today. William Tyndale’s pocket Bible was a revolutionary idea in his day just as the BTJ pill-sized hologram Bible is today. The Bible is still illegal to own in 52 countries, just as it was during the days of William Tyndale. Christians are still giving their lives in sacrifice to get the Bible into the hands of those who need it.

BTJ has declared this year, 2022, the YEAR OF THE ILLEGAL BIBLE. Printing and distributing Bibles illegally in China is where it all started for Back to Jerusalem. Since our first illegal Bible printing, BTJ has been able to print more than 10 million Chinese Bibles, but there is still work to be done.

At the beginning of this year, BTJ sent out YEAR OF THE ILLEGAL BIBLE prayer calendars to encourage supporters around the world to pray for those printing the Bible illegally. Every month, we encourage our partners to pray for a different nation where BTJ is providing Bibles to a hungry church that are not allowed to have Bibles.

This month, BTJ is providing 10,000 newly printed Bibles to the nation of Iran. If you would like to join the efforts to provide illegal Bibles behind the walls of closed nations, follow the link below.