Brother Yun is wrapping up his tour of Finland and Sweden for 2022 and he stops to share a message that God gave to him during his time in one of the most unique saunas in the world.

Pastors in northern Finland heated up their sauna to several degrees above boiling point at 120ºC (that’s 248ºF for our American audience) and invited Brother Yun to join them. The sauna was on a frozen lake with a hole drilled into the ice and Brother Yun was encouraged to take a plunge into the frigid waters.  Brother Yun took them up on their challenge as can be seen in the picture below. 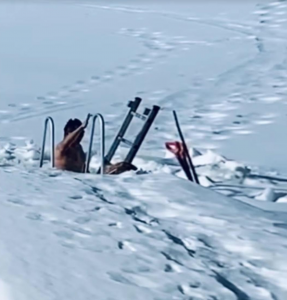 “When I came up from the icy waters,” Brother Yun recalled, “I seemed to hear the voice of the Holy Spirit say to the churches,”

I know your deeds, that you are neither cold nor hot. I wish you were either one or the other! … (v20) Here I am! I stand at the door and knock. If anyone hears my voice and opens the door, I will come in and eat with that person, and they with me. To the one who is victorious, I will give the right to sit with me on my throne, just as I was victorious and sat down with my Father on his throne. Whoever has ears, let them hear what the Spirit says to the churches.

To join future tours with Brother Yun in Sweden or Finland, please follow our partners at www.ljusioster.se