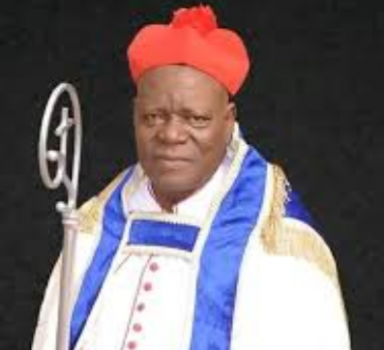 Last Saturday, Eugene Bach did a Facebook live about the situation in Nigeria. Pastor Olamide Dawson, a Nigerian pastor involved with the CAN (Christian Association of Nigeria) spoke with Eugene about the recent kidnapping of Bishop Joseph Masin. We were called to pray for his release.

Bishop Joseph Masin is an important leader of the churches in Nigeria and chairman of the CAN in Nasarawa State. A fellow leader of the CAN, Reverend Lawan Andimi, was killed in January in a gruesome way by his Boko Haram kidnappers. To prevent the loss of another beloved leader, the CAN called on the government to intervene, something the government has been unable or reluctant to do in many of the recent attacks against Christians.

Bishop Masin was at home and preparing to go to bed, when he heard someone outside call for help. When he opened the door, he was taken at gunpoint by terrorist to an unknown location. A demand for a ransom was made.

These are no isolated incidents. The month of Ramadan has seen a discouraging uptick in the attacks of Christians in Nigeria. At least 100 Nigerian Christians have lost their lives during this month alone. The attackers almost never face any form of justice. There was every reason to fear bishop Masin would face the same fate as so many other Christians before him.

However, on Monday the news came that after a ransom was payed, the bishop Masin was released and came home on Sunday. We thank God for this answer to prayer.

Meanwhile, the time of testing for the church in Nigeria is far from over. While the church enjoys relative freedom in the Christian South, in the Islamic North of the country, Christians continue to face the threat of mobs sweeping their villages, kidnapping and killing their people. The weak response of the government emboldens the attackers.

Nigeria is one of the largest Christian nations in the world, sitting on the fault line where Christianity and Islam meet. It is a strategic nation for the gospel and for mission in Africa and beyond. Let us keep our brothers and sisters in our prayers, as they seek to be faithful to the gospel even as they are under attack. And let’s remember their leaders too, that God will protect them from harm and inspire them to lead their churches trough times of testing, to his glory.