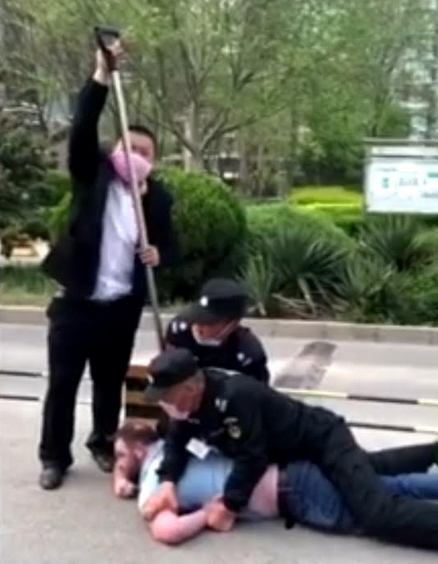 A foreigner living in Beijing was tackled to the ground when he tried to enter his living quarters of Qingnian Lu community without a face mask. The foreigner, who seemed to be intoxicated and trying to make his way back home with his Chinese wife, was prevented from entering when the guards pointed out that he was not wearing a mask.

He thought that the rules did not apply to him. He was wrong.

“Look…. no, no, no,” the foreigner said as he pointed to his resident card proving that he lived there, but he was not wearing a mask so the community guards would not let him in to his residence.

The foreigner was quickly tackled by several guards from Qingnian Lu community, thrown to the ground, and detained.

After the foreigner was on the ground, one passerby used a long metal pole to hold the foreigners neck in place.

This incident is unfortunately not isolated. It points to a deeper problem brewing in China.

Clashes with foreigners are sky-rocketing in China and missionaries are concerned.

A second wave of the coronavirus is hitting certain areas of China and a string of news stories say that foreigners are the cause.

“We are being yelled at by strangers on the street, telling us to go home,” one foreign missionary in China shared with me last week. “We are staying home, because it is starting to get dangerous for our children.” Some missionaries feel disappointed, because they chose to stay in China and show their support even when it would have been safer and easier to return to their home country.

Chinese social media has been flooded with hateful and sometimes violent comments targeting foreigners. One article created by a WeChat group named Lucky Fish Youth on WeChat blog (锦鲤青年) went viral when they posted an illustrated handbook of how to properly sort the foreign garbage with the recyclables. 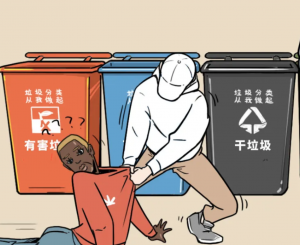 As negative information about foreigners in China has grown, so has fear and mistrust. The xenophobic tone of the cartoon handbook echoes scores of recent personal accounts of foreigners being confronted with uncomfortable experiences that include being denied services at local businesses and being called derogatory names in public.

Last week, McDonald’s had to issue a public apology after it was revealed that their restaurants in Guangzhou had been displaying signs that said, “from now on black people are not allowed to enter the restaurant.” 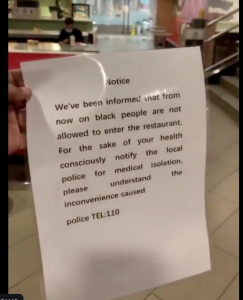 Africans in the southern Chinese city have been evicted from their homes by landlords and turned away from hotels, despite many claiming to have no recent travel history outside of China. 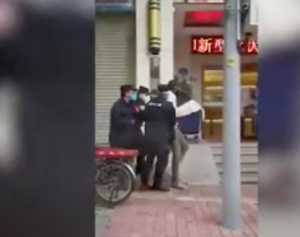 The above picture is an African being forcefully led away from a shopping area in Guangzhou by local guards.

Even though some of the signs have been taken down to avoid bad publicity, the anti-foreign rules are still being enforced. A couple of days ago, two Africans who tried to enter into a market were stopped by the door guards. They were not given a reason why they could not shop, but were simply prevented from entering. The market was open, did not have a sign preventing Africans, but they were prevented from entering while being passed by locals who did enter without incident. 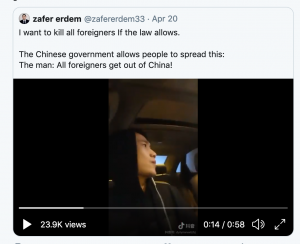 A message shared on Twitter on April 20, depicts a young Chinese man saying that he would enjoy killing all foreigners if the law would allow him. His message, and many like it, are circulating without restriction in China. As of the writing of this article, the message is still up on Twitter. Threatening to kill foreigners in China is apparently not a big problem for the social media company.

The Chinese Christian who shared the top story with me is abhorred by this kind of behavior. He has praised the efforts of the missionaries who have given their lives for China to hear the Gospel. “We owe a great debt to the nations of American and England,” Brother Yun has said during many meetings.

The anti-foreigner behavior that is impacting missionaries in China today is the reason why Jesus is needed more now than ever. Communism and atheism do not have a reason to show equality. Only the love of Christ can combat the hatred and suspicion of each other in China.