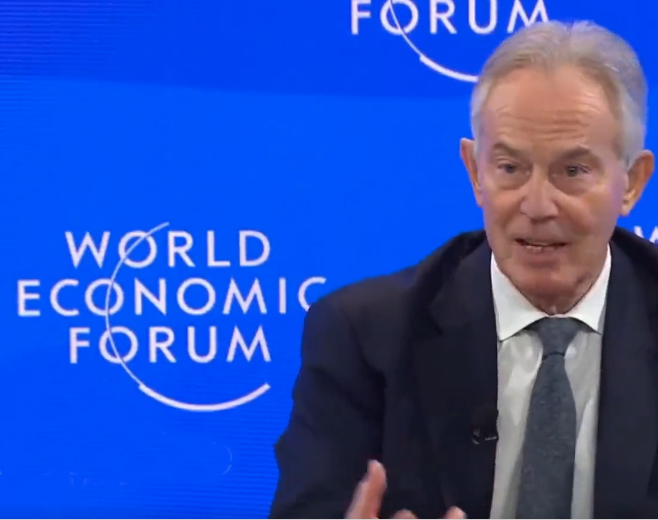 In line with China’s vast digital monitoring system, former UK Prime Minister, Tony Blair, called for a “digital infrastructure” on a global scale to monitor who is vaccinated and who is not at Klaus Schwab’s World Economic Forum.

NEW – Tony Blair calls for a "digital infrastructure" to monitor who is vaccinated and who is not for the "vaccines that will come down the line" at Klaus Schwab's World Economic Forum.pic.twitter.com/t5SM0Lv1hw

The World Economic Forum, a gathering of the world’s most elite individuals, is struggling to find ways to force the world into a one world government and economic system. Simply by looking at China, the world can see the idea is problematic. For the last three years, the world has watched in shock and horror as China implemented one of the most comprehensive Orwellian digital monitoring systems in the history of man to control the behavior and movement of its citizens; a system very similar to what Tony Blair is promoting. On almost every measurable index, the system in China has been a human rights disaster. People on the verge of starvation were not free to go and buy food, hundreds of thousands of small businesses were shut down overnight, homes had doors welded shut from the outside, and citizens were sent by bus to government camps. Christians in China know this better than almost anyone.

Christians have seen the control measures for what they really are: a back door to control unauthorized church gatherings, stop illegal evangelism, and halt the distribution of forbidden Biblical teachings. It should be clear that Tony Blair is not fighting for one world digital monitoring systems to infringe on human rights, promote persecution of Christians or restrict religious freedom, but instead, to save lives and promote safe health measures for everyone. It should also be clear however that China’s stated goals for implementing the digital monitoring systems were the same as Tony Blair’s.

Tony Blair, pushing the agenda of his Tony Blair Institute for Global Change Global Identity sector, included China in his plan to implement digital monitoring without directly saying it. “Who are the people that can make this happen?” Blair said referring to implementing a mandatory one world digital monitoring system that everyone in the world would have to abide by. “How do you get the right partnerships in place? […] That should happen in the G20 particularly, I think, which is […] G7 is an important forum, but the G20 is the broader forum.” The G20 includes China, while the G7 does not.