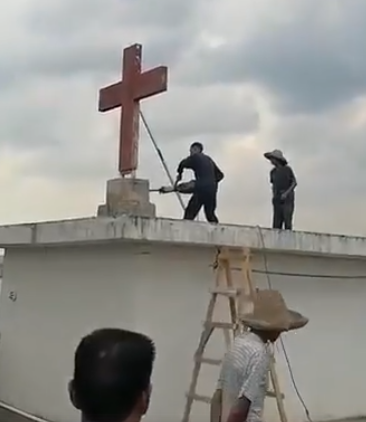 How was your Sunday morning? Were you able to attend a fellowship in person, or did you join an online service?

Most likely, your Sunday morning was a lot different than for the members of an official protestant Christian church in Xinfeng County in Jiangxi Province yesterday.

According to a video that was shared on Facebook by a group called China Christian Fellowship of Righteousness, officials in Jiangxi ordered the removal of a red cross from the building. The government could have chosen any day to remove the cross from the village church building, but they specifically chose Sunday morning so that the members and the local villagers could watch.

As the officials removed the cross, there was nothing that the believers could do but watch. From the video, it is understood that the symbolism of removing the cross is meant to show the impotence and powerlessness of the church. However, in many ways, the opposite could be understood.

The church is growing so fast and is gaining so many members in China, that the government is afraid to see their Communist nation turn into a Christian one. The number of underground house church members is currently larger than the entire Communist Party.

If Christian history in China has shown us anything, it is that the Chinese church grows the most when persecution is present. Very few things visibly symbolize the presence of persecution than government officials forcefully removing crosses on Sunday morning.