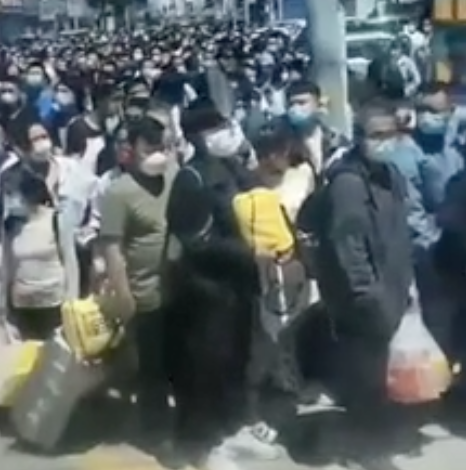 Shocking videos of thousands of people being rounded up, marched through the streets, put on buses, and shipped off to ‘quarantine camps’ are seeping out of China.

Like a scene from a WWII movie, voices are barking instructions over loud speakers, as families are forced out of their homes. The video was recorded in a village near the Chinese port city of Tianjin, where the government has ordered people to be transported to designated camps.

The reasoning behind the forceful isolation of so many people is not clear, but the reason given is said to be China’s official strict Zero-Covid strategy.

Tianjin is just the latest area to be hit with extreme lockdowns. Shanghai has recently been going through extremely harsh rules deployed by the government.

“We have not been able to leave our home in over two months,” reported one BTJ worker this week. “The international news has been reporting that we are no longer in lockdowns, but it is a lie. We are still in lockdown.”

The BTJ worker and their family have to take a Covid test every day and hang the testing units on their door, so that government officials can come by and evaluate them. “We have been forced to take the test every day for the last three months … we no longer actually test ourselves, but instead just put the testing units in water and then hang them on the door to be collected.”

At the time of this writing it is estimated that 10,000 – 30,000 residents have been forcefully placed in quarantine. China’s Covid-camps dotted around the country currently make it the world’s largest prison.