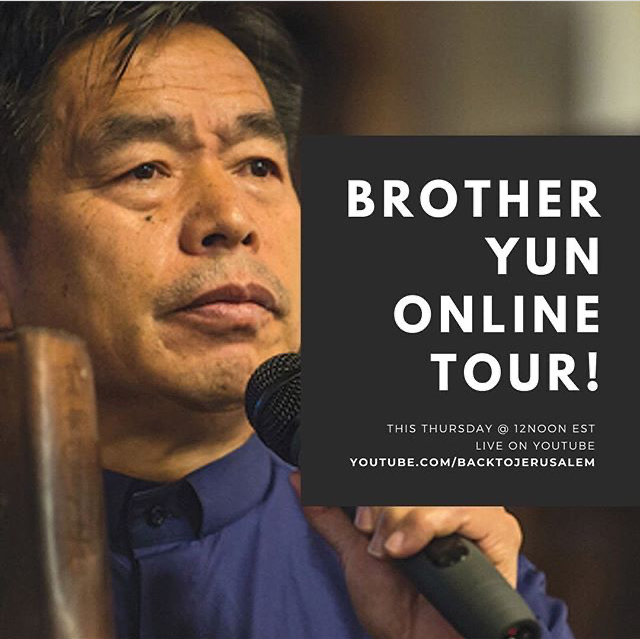 Disappointments can be turned into blessings. This week many American believers were looking forward to hearing brother Yun speak and meeting him in person. Because of Corona travel restrictions, this is no longer possible. BUT…

Something else will happen, which may even bless more people than we had foreseen. We will take our tour digital and focus on encouraging believers around the world, including in China.

Yes, including China. Controls on Chinese social media have tightened so much during the Corona crisis, that more people have found their ways to VPNs and are managing to work around the restrictions on these. After many weeks of a necessary but destructive lock down, and facing more state control than ever, they need this message of encouragement. Just like Christians in Europe and America, where people are just now coming face to face with this invisible enemy, threatening their health systems and financial security. And let’s not forget believers in South America, Africa and South Asia who are coming to terms with the realisation that they may very well be next.

Brother Yun has prepared several messages, and he will speak together with brother Ren about ‘Do Not Fear!’. When Brother Yun says ‘Do not fear’, he does not speak out of denial of danger, or a vain hope to calm stock markets, but from his personal experience of persecution, imprisonment and torture. He knows what he is talking about. He has faced danger and has led churches through times of great uncertainty. These are times in which we can turn to those who have walked through fear and let them teach us how to be strong.

Pass this message on to anyone who needs to be encouraged and see you Thursday!