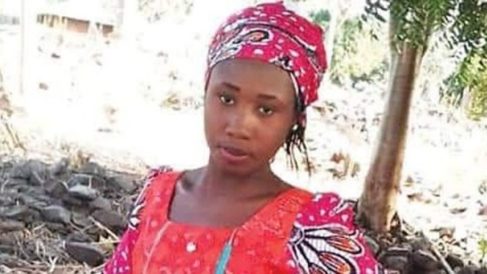 When writing about the persecution of Christians in Nigeria, it is tempting to begin with numbers, and use words like ‘genocide’. Yes, numbers are staggering, but for us who are far away, it is important to be introduced to some of our brothers and sisters by name, and to see their faces. Today I want to introduce you to Leah Sharibu.

On February the 19th of 2018, Leah was 14 years old when she was abducted from her school in Yobe state in the North East of Nigeria by Boko Haram. 109 other secondary school aged girls were kidnapped too, five of whom died that same day.

The circumstances were suspicious. The army had just decamped from the town the day before, without any good reason. And this was clearly a well-coordinated attack.

The government did not respond for days. Eventually, on the 21st of March, after just over a month in captivity, the Nigerian government secured the release of 104 of the kidnapped girls that were still alive, by paying a substantial ransom. One girl was not released however, because she had refused to convert to Islam. This girl was Leah.

After six months in captivity, she was used as a bargaining chip by Boko Haram, who threatened to kill her if the government would not meet their demands. An audio message of the girl was released.

In spite of much advocacy by the Nigerian church and foreign agencies, Leah remains in captivity. It was reported that early this year, she gave birth to a baby boy. On May the 14th of this year, she turned 17, now a teenage mother in a forced marriage to a terrorist who keeps her captive somewhere deep in the forest near lake Chad.

Nigerian Christians still plead with the government to bring her home. ‘She is our daughter’ one Christian leader pleaded, ‘and we want her back’.

Leah Sharibu has become a symbol of the vulnerability of Christians, of the cruelty of terrorists and of the unwillingness of the Nigerian government to pursue justice on behalf of Christians. Her case has become bigger than herself, as advocates use her example to draw attention to the fate of so many vulnerable Christians in states plagued by Islamic terrorists.

But in spite of all this, she is still a person, a once ambitious teenager, and now a young mum of the son of a terrorist, who may be nursing and cradling her baby as you are reading this. She may still be praying that she will see her own mum again one day. And we pray that she may.

She was also a girl who, at the age of 14, found the strength to choose Christ over being reunited to her parents, as she stood up to the pressure of terrorists who could easily have killed her. And they still may. So, join us in prayer for Leah today, and for others like her. May God be with her and bless the church of Nigeria.