Iranian opposition leader Mirhossein Mousavi has compared Supreme Leader Ayatollah Ali Khamenei to the Shah, the monarch deposed in a 1979 revolution, following the government’s crackdown on protests this month.

The unrest began on Nov. 15 and have only intensified. Not much news is coming out about it, but BTJ partners inside have been reporting massive problems throughout the nation.

The protests that started because of high fuel price hikes, have quickly turned political, with demonstrators demanding the removal of top leaders.

It is clear the government is scared. They have shut down the Internet and have put a block on travel for anyone coming in or going out that might have any inside details about the protests. The country is on complete lock down. 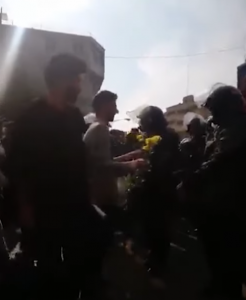 The latest protests have been happening in the city of Shiraz. At first the protestors and police were friendly and peaceful with each other. Videos of the protestors can be seen giving flowers to the police (as pictured above taken from a video), but that did not last.

The police soon turned violent against the protestors and the city streets were blocked off creating complete gridlock on the streets. 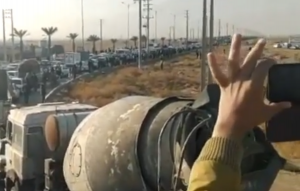 “It has been really bad,” said one BTJ partner inside Iran. “The police are brutal. They are beating people like we have never seen before. The secret police are roaming around and snatching people from their homes. They do not need a reason. They do not need evidence. The government is lawless right now and the people have no escape.”

The root of the problem is not the fuel price hikes. The problem is the people are simply fed up with the Ayatollah and the Islamic regime.

The Tehran government has blamed “thugs” linked to the country’s main foreign foes, namely the United States, Israel and Saudi Arabia, but the truth is Christian revival is exploding everywhere and the people want religious freedom in the country.

Iran has given no official death toll, but several international observers have said that as many as 200 people have been killed in the last two weeks. Tehran has rejected these figures.

The Supreme Leader took power in 1979 after the Iranian people were sick of the Shah, but the hardships under the Shah were nothing compared to today. The protests that are taking place on the streets today are reminiscent of the 1978 protests that over threw the Shah.

This comparison should have the Supreme Leader worried.

Iran has been experiencing the world’s largest revival of any nation in the Islamic world. BTJ is partnered with the church inside of Iran and is helping to provide support to the underground house church.

Our prayers go out for the Iranian people during this time of hardship.