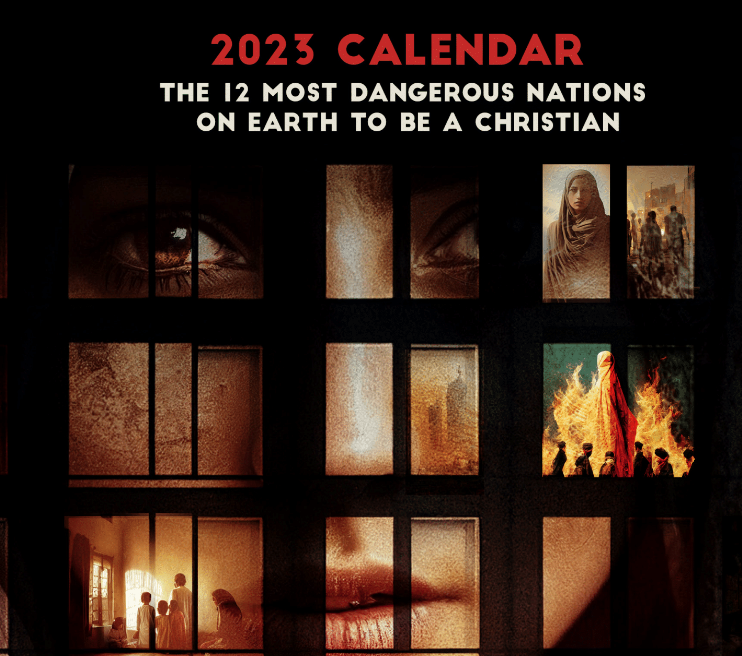 The 2023 BTJ Prayer Calendar, THE 12 MOST DANGEROUS NATIONS ON EARTH TO BE A CHRISTIAN, might be the most important prayer calendar that we have ever published.

GET YOUR FREE CALENDAR NOW

SEND AN EMAIL TO:

Christian persecution is “the biggest story in the world that has never been told,” James Shannon, a Member of Parliament, said before the British House of Commons and he is not wrong.

The European Parliament echoed MP James Shannon in their Annual Report on Human Rights and Democracy in the World, declaring Christians to be the most persecuted group in the world. More than 360 million Christians worldwide suffer from varying degrees of persecution.

In China, an underground house church pastor who works closely with Back to Jerusalem reported, “We have seen more persecution against Christians in the last three years than the last three decades.”

This news is shocking to most Christians who live in the west, but perhaps it shouldn’t be. Jesus did promise that His followers would suffer persecution in the last days. “Remember the word that I said unto you. The servant is not greater than his lord. If they have persecuted Me, they will also persecute you.” (John 15:20a). Jesus promised that the world would hate those who follow Him, “If the world hates you, you know that it hated Me before it hated you.”

It is illegal to own this Bible, and perhaps even this calendar, in 52 COUNTRIES and there are at least 10 COUNTRIES in the world today where converting to Christianity is automatically punishable by death.

In Matthew 24:14 Jesus said, “And this Gospel of the Kingdom shall be preached in all the world for a witness unto all nations; and then shall the end come.”

The Gospel started in Jerusalem and has almost completed a full circle around the globe, quickly making its way back to Jerusalem. The Good News is spreading at a faster rate today than ever before and the persecuted church is determined to help complete the Great Commission and usher in the return of Jesus Christ. As a result, the enemy is panicking, because he knows that his time is short. Satan is lashing out in the form of persecution against the followers of Christ. Unfortunately for him though, throughout history we have seen that persecution has a way of contributing to revival, revival feeds a ravenous desire for missions and missionaries can’t help but to preach the Gospel of the Kingdom to the nations. In this way, it can be argued that persecution accelerates the completion of the Great Commission, but we still must pray for those who suffer for the Gospel. We are compelled to stand beside them in prayer and deed.

May we never forget the heroes of the faith.

As we partner together with indigenous churches in the most dangerous nations on earth, we want to remind our partners to pray for and support persecuted Christians. In the year 2023, we want to remember those suffering in the TWELVE MOST DANGEROUS NATIONS TO BE A CHRISTIAN.

We believe that there is awesome power in the collective prayer of the saints and we invite you to join us to pray for our brothers and sisters in each of these twelve nations every month.

If you would like to receive a ffree prayer calendar, please send a request to update@backtojerusalem.com