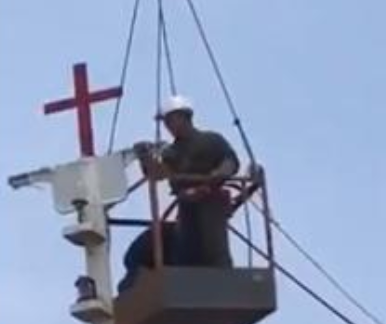 Christian fishing boats were forced to remove crosses from their boats before they were allowed to return to the sea, according to a recent report from Christiantimes in Hong Kong.

The sea can be a deadly place and, for fisherman on the island of Qushan, it has been a long tradition among Christians to have crosses on their boats as a symbol of their devotion to Christ while they are away from their families facing the deadly waves.

However, China’s new zero-tolerance policy for unauthorized Christian symbols led to the Christian fishing boat crosses being forcefully removed. The videos and photos show someone demolishing a cross and defacing the word “Emmanuel” on the hull.

On August 1, China launched a coordinated assault on about 130 Christian fishing boats and forbid them from leaving the harbor until their crosses and ‘Christian symbols’ were removed. Boats with other religious symbols were not included – only the Christian boats were targeted.

Qushan Island is a unique place in China where about 50% of the occupants are believers! This recent attack will most likely backfire, solidify the church, and lead to even more islanders coming to Christ.